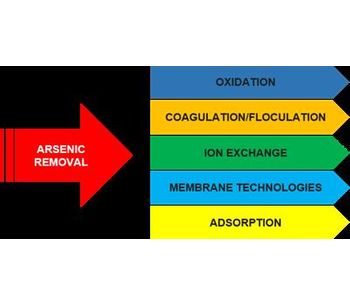 Arsenic is a naturally occurring element found in soils and groundwater. Arsenic concentrations vary in accordance with geographic location. When arsenic levels are found to be too high at a specific location, it may be necessary to treat water to remove it. Arsenic usually exists in two different forms, or valences, in a natural setting depending on the amount of oxygen available in groundwater. In more shallow aquifers with higher levels of oxygen, arsenic will usually exist as arsenate, As (V). In deeper, anaerobic ground waters, arsenic usually occurs as arsenite, As (III). In the pH range of 4 to 10, the predominant As (III) compound is neutral in charge, while As (V) species are negatively charged. Removal efficiencies for As (III) are usually less than those of As (V) because of As (V)’s negative charge. In many cases, pretreatment of As (III) to oxidize it to As (V) may be necessary to efficiently remove arsenic from drinking water.

In general the most effective steps to remove arsenic to achieve potable water admissible levels are:

Since every water source has different composition, we strongly recommend to perform a complete water analysis to properly size the arsenic removal solution that meet the customer’s criteria. These are the basic parameters to know in order to properly size the solution.

Typically we recommend the following steps:

Complete flowchart for arsenic removal below showing the ADVANCEES system. This flowchart vary based on raw water quality and customer’s requirement. Many options and combinations are possible, the best solution needs to accommodate the minimum life cycle cost such as low operating cost, low maintenance, easy to operate and monitor.