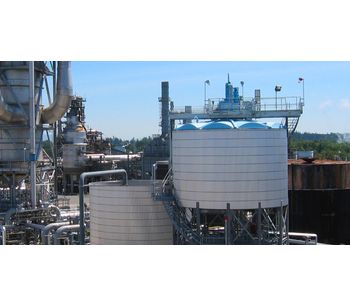 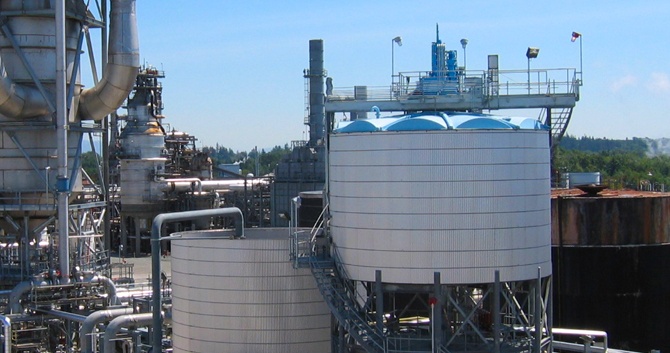 Cracking in a refinery is a process where the long organic chains in oil are broken to produce shorter chain organics that are more valuable than the oil. Fluid catalytic cracking (FCC) has generally replaced thermal cracking of petroleum hydrocarbon feed stocks. FCC produces more gasoline with a higher octane rating. FCC’s byproduct gases are more olefinic and valuable than those produced by thermal cracking.

The FCC process can also convert heavy oils such a...

The FCC process can also convert heavy oils such as oil sands into lighter, more valuable fuel products such as gasoline. This increases refinery profit and allows a wider range of process feed stocks. The byproduct gas emissions are classified as hazardous waste. Increasingly stringent environmental regulations require the scrubbing of exhaust gases prior to environmental discharge.

Scrubbing removes particulates including sulfur dioxide (SO2) and nitrogen oxides (NOx) by washing them from the flue gas stream. NOx is a generic term for the mono-nitrogen oxides NO and NO2 (nitric oxide and nitrogen dioxide). If released to the atmosphere, NOx reacts to form smog and acid rain. Scrubbing is accomplished by spraying an aqueous scrubbing liquid within the flue gas in a vessel that is part of the stack system. This process is much the same as flue gas scrubbers in other applications such as flue gas desulfurization (FGD). After scrubbing, the clean flue gas is vented to the atmosphere and the SO2 and NOx-laden liquid flows to the thickener for treatment.

The thickener’s flocculating turbine turns at low speed imparting the mixing energy required for inlet stream particles to contact one another in order to form flocs. The mixing energy is carefully engineered so as to avoid shearing the newly formed flocs.

A sludge layer is formed in the thickener as solids settle. This is expected and engineered into the thickener design. Nevertheless, it can grow quite heavy in the event of an upstream process upset. This can result in an increased torque load on the rake mechanism. Inadequate sludge removal can also cause torque to increase. In either case, the unit is equipped with a torque sensor which will activate the rake lift motor at preset torque levels. This mechanism will raise the rake assembly twice in one-foot increments, each time actuating an alarm in the control room. If the torque continues to rise after the second lift and alarm sequence, the unit sounds a third alarm and shuts off the rake drive until the problem is corrected.

The thickener tank’s top and sides are insulated. This is to prevent the liquid near the perimeter and top of the tank from cooling at unequal rates compared with the liquid at the center of the tank. If the liquids are allowed to cool at different rates, thermal currents cause unwanted mixing. If not insulated, these currents would adversely affect the thickener’s efficiency. If enhanced clarity is desired, a gravity filter may be used to polish the thickener effluent.