When Physik Instrumente (PI), a premier supplier of nano-positioners, needed to characterize and quantify the performance of their PICMAWalk positioner, ZYGO's ZMI™ Displacement Measuring Interferometer was the right choice.

ZMI products deliver resolutions down to 0.154 nm of real-world noise-limited performance with modular components which allow for flexible configuration and simple expansion. This level of performance is enabled by heterodyne interferometry which uses a carrier frequency, like FM radio, to make high-fidelity measurements.

In a recently-published technical paper and video, PI describes how they used a ZYGO ZMI system to demonstrate their PICMAWalk positioner's capability to reliably and repeatably move in 0.5 nm steps using closed-loop control.

In the PICMAWalk setup, PI closes the loop on their N-331 positioner using a ZYGO ZMI setup composed of a 7702 laser head, a differential interferometer (DPMI), and a 4104C measurement board. 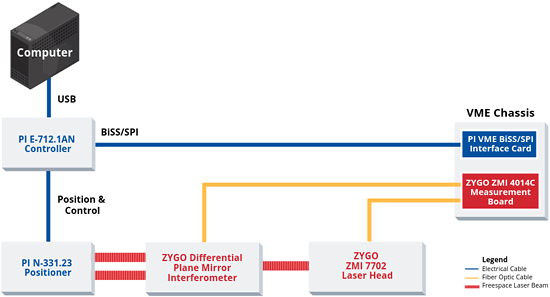 PI's N-331 positioner comes with an optional internal reference linear encoder with a resolution of 10 nm. By bridging the communication between PI's E-712 Motion Controller and ZYGO's 4104C board, PI was able to control and measure the motion of their stage to clearly-defined 0.5 nm increments, which is well below the noise floor of the internal sensor. (See graph below.) This demonstrates that using the ZMI system to provide closed-loop position feedback helps unlock the full potential of PI's N-331 positioner system. In addition to PI using the ZMI system to characterize their nano-positioning systems, PI recommends the ZYGO system to customers who need the highest possible level of precision and performance. 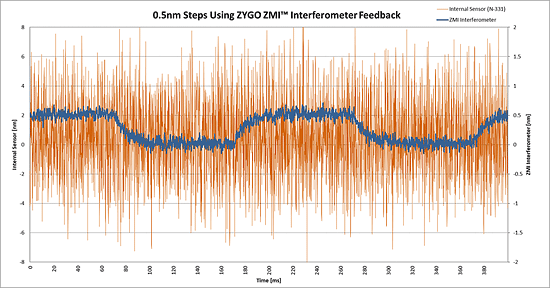 The ZMI 4104C board used by PI in this setup has the ability to reduce non-linear cyclic errors into the noise floor of the measurement. Cyclic error terms are inherent in all displacement interferometry measurements. ZYGO laser heads and optical components are designed and manufactured to achieve a low cyclic error of nominally 1 nm. In contrast, interferometer systems from other manufacturers can have cyclic errors as high as 10-20 nm!

While not essential for demonstration of small nanometer steps, cyclic error compensation would be critical where nanometer level precision is needed over larger movement ranges. The images below exemplify the type of performance and compensation that the ZYGO ZMI system can deliver.

In the world of nano-positioning, the ability to precisely and repeatably move, detect, and measure small motions – on the order of nanometers – is all-important, and requires advanced technologies like ZYGO nano-position sensors. Unlock the best performance of your positioning systems with best-in-class metrology and feedback from ZYGO.

No comments were found for A Nano-Positioner Manufacturer uses Zygo Displacement Measuring Interferometer. Be the first to comment!