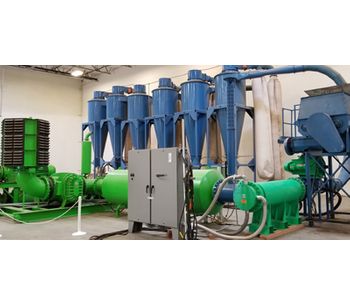 It’s becoming increasingly difficult to dispose of biosolids (sewage sludge) in a safe and cost-effective way. The Dryclone® Air Drying System offers an efficient, safe, and low-cost solution that’s aligned with the future of biosolids usage. The Dryclone efficiently removes moisture content from biosolids, reducing the weight by at least 70% and optimizing the product for energy or nutrient recovery. This delivers significant cost savings and opportunities for revenue generation.
THE PROBLEM WITH BIOSOLIDS

Until recently, land application has been common practice for disposing of wet biosolids. The process includes the cost of transporting the heavy wet material to the nearest agricultural land, which may be far away from cities. Plus, land application tends to be seasonal, so the wet biosolids need to be stored during the off-season.

Some countries have banned land application because of the harmful substances found in biosolids such as microplastics, heavy metals, pharmaceutical residues, and harmful chemicals such as PFAS. It’s very likely that land application will be severely restricted or eliminated, so other options for disposing of or using biosolids need to be found.

High moisture content makes transporting and disposing of biosolids difficult and expensive, and often limits the options to land application or landfill disposal. So, it makes sense to get rid of the moisture content as close to the source as possible. Conventional dryers such as belt dryers and drum dryers struggle to do this efficiently because sludge is difficult to feed and the cell structure retains a lot of the moisture inside.

Unlike conventional dryers, the Dryclone uses only managed airflow, in large quantities and at very high speeds, to convey, size, dry, and blend biosolids. There are no moving parts in the material’s path and no liquid output to manage. Dryclone’s unique aerodynamic pulverization opens the cell structure of organic materials, removing the moisture inside. Drying biosolids in the Dryclone reduces weight by at least 70%, resulting in a corresponding reduction in transportation and disposal costs.

Once biosolids are dried in the Dryclone, the result is evenly sized and consistently dry product that’s ideal for blending with solid recovered fuel (SRF) for use in cement kilns. It’s also optimized for use in waste to energy processes such as pyrolysis and gasification. In these applications, microplastic content in the dried product will add energy value, making the product even more valuable.

In markets where the product is still considered safe for the food chain, the dried product can be made into pellets and used in fertilizer manufacture. Typically, dry pellets can be used year-round, removing the cost of wet product storage and minimizing run-off into ground water.

Contact us to learn more about the Dryclone solution for biosolids/sewage sludge.

No comments were found for A new solution for biosolids (sewage sludge). Be the first to comment!