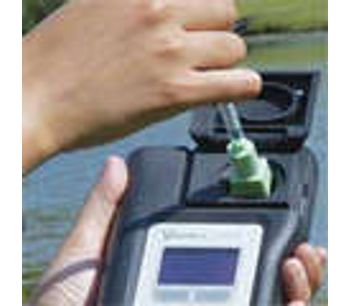 A completely new technology is now available that offers a new way to test water for contaminants andgreatly reduces the time, effort, costand complexity of testing water samples for contaminants such as lead ind rinking water. DNA sensor technology combined with a handheld fluorimeter platform tests water samples within two minutes, giving results at the push of abutton. Protecting public health by providing safe drinking water to citizens served by community water systems is and will always be a serious concern of government agencies, public water suppliers and private industry around the world. There is a growing need to make the onsite testing of these water supplies easier and more reliable to detect and assess contamination in a timely manner to shorten the harmful health effects of heavy metals in drinking water.

A completely new technology is now available that offers a new way to test water for contaminants and greatly reduces the time, effort, cost and complexity of testing water samples for contaminants such as lead in drinking water. DNA sensor technology combined with a handheld fluorimeter platform tests water samples within two minutes, giving results at the push of a button. This method enables water testing and reporting to be accomplished in a fraction of the time and cost of traditional heavy metals testing methods, and requires no particular skill set or knowledge of chemistry.

In the early 1980s, RNA molecules that can catalyze enzymatic reactions were discovered and named ribozymes. This discovery was followed by demonstrations in the 1990s that DNA also can act as enzymes, termed deoxyribozymes or DNAzymes. The fact that DNA/RNA are not only materials for genetic information storage and transfer, but also catalysts for a variety of biological reactions, and thus called catalytic DNA/RNA, (deoxy) ribozymes, or DNA/RNAzymes, meant that there were other potential uses for DNA beyond biological identification and gene identification.

Because metal ions play essential roles in the structure and function of DNAzymes, the study and application of these new metalloenzymes has become a new frontier in bioinorganic chemistry. The core research on which this technology is based was developed in Dr. Yi Lu’s lab at the University of Illinois. From this science, and with support from supplemental grant funding from the U.S. Environmental Protection Agency, engineers have created a product for detecting and quantifying heavy metals in water based on the recent discovery of these catalytic properties of DNA.

Putting the technology in the form of a workable and reliable platform that offers simple, fast, inexpensive and reliable detection of trace metals and other target chemicals was key to offering the industry a new and more effective solution. Measuring the metal ions is done through a reaction that occurs when a water sample containing a target metal ion contaminant such as lead is introduced to a sensor unit specific for that contaminant. This produces fluorescence (light) in direct correlation to the amount of metal ion present. The amount of light is measured by a handheld fluorimeter. The fluorimeter reading relates directly to the amount of metal contaminant in the water solution.

No comments were found for A new Use for DNA - Testing for Heavy Metals with DNAzyme Technology. Be the first to comment!