Gary Ford and Robert Anthony from South East Water suspected several hidden leaks in their network that they had previously been unable to locate. After an initial meeting with GUTERMANN a trial was carried out with ZONESCAN 820 lift & shift acoustic noise loggers. Following the successful trial, South East Water bought 400 correlating ZONESCAN 820 loggers designed specifically for town centres and 700 non-correlating lift and shift loggers for elsewhere for deployment on their water supply network.

The company’s war on leaks lead to an internal target to reduce leakage to 85 MLD by 2018. This meant looking beyond traditional methods and going into DMAs that hadn’t been surveyed in years.

Under GUTERMANN’s supervision South East Water devised a new, systematic approach to noise logging using an Android-based software that not only logs the noise but also records time-synchronised sound snippets allowing the operator to perform advanced frequency spectrum analysis analyses and correlate the data between the different sensors, thereby reducing the false alarm rate and pinpointing the exact location of the leak positions. Lift & Shift means that loggers are deployed on one day and collected/redeployed on the next day, while doing the actual sound recording during the night when the water pressure is high, and consumption and street noise are low. This way leaks can be easily heard and seen by the leak busting team who set about repairing them before they cause major problems to the network. These new, more sensitive and accurate correlating ZONESCAN 820 loggers have now replaced basic ones used for many years which have only given the leak information in numerical form and caused a lot of false alarms and false negatives (unidentified leakage).

ZONESCAN Smart, the tablet-based Android app not only displays the data and the leaks nicely on a street map, but it also has the optional capability to upload the measurements to the Gutermann.Cloud for storage and later review by utility managers.

Robert Anthony, Leakage Detection Manager for Hampshire, Berkshire and Surrey said: “We care about finding and fixing leaks as quickly as possible, but with most hidden underground and out of sight we need to use specialist technology like these correlators and loggers to track them down before we can repair the pipe”. Since the trial and purchase, nine lift & shift logging technicians have been recruited, six of which based across Kent and Sussex and three throughout Hampshire, Berkshire and Surrey. Each technician was given 80 loggers whereby they would be going into DMAs of high leakage or unknown leakage. 400 correlating noise loggers were placed in town centres across Kent and Sussex where it is hard to detect leakage during the day. The 1100 ZONESCAN 820 loggers have allowed South East Water to improve their leak detection coverage across the network. 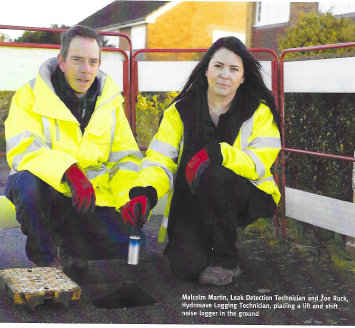 Gary Ford, Kent and Sussex’s Leakage Detection Manager said: “These new loggers have enabled us to repair small leaks, before the holes in the pipe had a chance to grow losing more water and possibly causing the water to seep to the surface of the ground. This new equipment is helping us go that little bit further to providing the five out of five service our customers expect”. With a £133,000 investment in new leak detection technology it has seen the number of leaks found by the company has increased by 54% in just 3 months. The coverage that South East Water has of their DMAs has increased by 0.8 to 2.4 allowing the company to have a better understanding of DMAs with unknown or high leakage.

No comments were found for Acoustic noise logging with ZONESCAN 820 increases leak pinpointing by 54% at South East Water - Case Study. Be the first to comment!