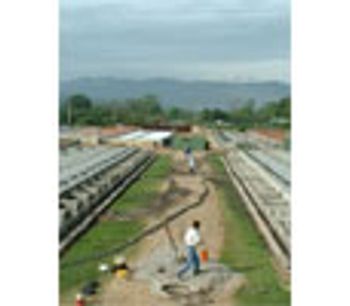 Anaerobic sewage treatment technology in Latin America: a selection of 20 years of experiences

From the early introduction of Anaerobic Sewage Treatment, AST, technology to Latin America 20 years ago to now, the technology has become a viable alternative to provide affordable sanitation to the region. The engineering community has learned to identify and manage the main risks factors of the technology, namely: odor emissions, material corrosion, scum removal and low treatment performance as compared to aerobic biological processes (70 - 75% BOD and TSS removal). AST is used as an advanced primary treatment system, with low temperature anaerobic digestion and thickening in one compact, operationally simple and energy efficient unit. The technology can be considered mature in countries like Brazil where major cities such as Curitiba, Campinas and Belo Horizonte have built large plants, up to 80 mgd in capacity, based on the combination of UASB reactors and a polishing step. Diverse polishing steps have been researched, piloted and implemented successfully in the field. Examples of intermediate to large scale plants operating along with Stabilization Ponds (Bucaramanga, 16 mgd), Trickling Filters (Cazadores and Barao Geraldo, 7 mgd) to Activated Sludge (Pizarrao, 13 mgd), Dissolved Air Flotation (Onza, 80 mgd) and Biological Aerated Filters (Boa Vista, 5 mgd) are presented. Most of the existing experience is with warm sewage, with temperatures of 20C or above using upflow anaerobic sludge blanket, UASB, type reactors. The technology has also been applied to colder influent sewage with temperatures as low as 15C. in smaller scales of up to 1 MGD obtaining 70% BOD removal and using anaerobic baffled reactors. Additionally, new concepts and developments such as the HRAP are being implemented and tested at full-scale in mid-size municipalities of Colombia

The capital costs of implementation to achieve secondary level treatment are significantly lower than conventional technology. Savings of up to 50% in capital costs to achieve secondary level treatment using UASB + lagoons have been reported. Lower savings are realized for the combination of UASB and activated sludge. However, the biggest impact is in the reduction of operational costs for aeration and sludge management. There are still limitations in combining

No comments were found for Anaerobic sewage treatment technology in Latin America: a selection of 20 years of experiences. Be the first to comment!