Are Those Inexpensive iPad Sound Measurement Apps Any Good?

Are those inexpensive iPad sound measurement apps any good? Are they as accurate as a properly calibrated $2,000 type 2 sound level meter?

NIOSH concluded, 'a total of 130 iOS apps theyre examined and downloaded from the iTunes store*, of those, 10 apps met our selection criteria. A total of 62 Android apps were examined and downloaded, however, only 4 apps partially met our criteria and were selected for additional testing. As a result, a comprehensive experimental design and analysis similar to the iOS devices and apps study above was not possible. In conclusion, smartphone sound apps can serve to empower workers and help them make educated decisions about their work environments. They may be useful for industrial hygienists and OS&H managers to make quick spot measurements to determine if noise levels exist in a workplace that can harm workers’ hearing. The ubiquity of smartphones and the availability of these sound measurement apps may also present new research opportunities for occupational hearing scientists and researchers.' 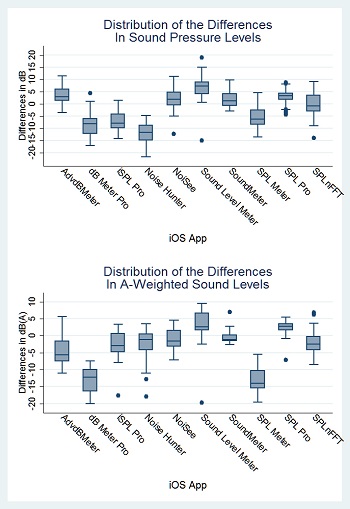 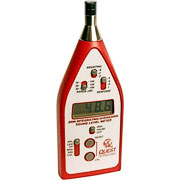 The type 2 sound level meter which was used as a comparison was the 3M/Quest Model 2200 SLM . The 3M/Quest sound level meter was calibrated both before and after testing. The sounds they measured were generated by on-line tone generators. The unit of measurement in all cases were decibels (A scale). The following is a description of the four tests:

All of the apps they tested had readouts showing: current noise level, average noise level, peak noise, and peak hold. Even though some of the apps allowed for the use of external microphones, all app testing was done using an iPad's built in microphone. None of the apps had a proper built-in calibrator so factory default calibration settings were used in all cases. Please note that this was not done by a testing laboratory, and these findings should not be considered infallible.

Based on the results of the study the following apps were found to be totally useless: Decibel Pro II, dB, Sound Meter, Noise Alarm, iSPL, Audio Tool, Noise Meter, Decibel Ultra, dB Meter Pro, Decibel 10th, Decibel Meter, Sound Level Meter and Noise Sniffer. They were extremely inaccurate and also lacked quite a few key features. The results from these apps were not included in the study.

Their highest rated app is the SPLnFFT app. It received our highest possible rating – five out of five stars. During the four tests they conducted, this was the only app to provide accurate results each and every time. It passed all four tests with flying colors. In fact, this app’s results were so close to the results obtained using the $2,000 noise meter that the tiny differences between the two are probably due to sampling error. Also, this app measures noise levels up to 130 decibels.

Update – February 17,2014 – They reviewed a sound measurement app on this date called logSPL. It was created by the developer of SPLnFFT. It is basically the little brother of SPLnFFT, it is simpler to use, and it is $2.00 cheaper then it’s big brother. They tested logSPL against SPLnFFT and found the results to be nearly as good.

The SoundMeter+ app for $1.99 is our second highest rated app. It passed three of the four tests. It is not as accurate on the higher frequencies as the SPLnFFT app is, but it will record sound levels up to at least 116dB (maybe higher, but 116dB was as high as they cared to test).

The SPL Meter app came in at third place. It passed two of the four tests. they found it difficult to reset, lacking some features, and it also had trouble with the higher frequencies.

While the remaining apps shown below all had the key features they like to see in a sound measurement app, none of these apps came close on even a single test to the results attained with the 3M/Quest Model 2200 sound level meter. 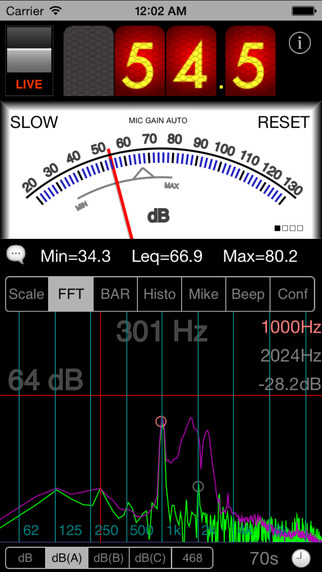 They went on to say the following: In the USA, OSHA standard 1910.95 (Occupational Noise Exposure) states that sound level meters that are used for OSHA compliance surveys should meet the ANSI S1.4-1971 (R1976) standard. The more expensive sound measurement apps actually say in their descriptions that they do not meet this ANSI standard. While the cheaper apps are silent on this subject, they assume that none of them meet the standard either. So, as of this writing, they know of no apps that meet ANSI S1.4-1971 (R1976). Therefore, for OSHA compliance purposes, one should not use any of the current crop of sound measurement apps to measure workplace noise. However, there are other reasons one might want to measure noise (e.g. engineering purposes, noise pollution, frequency analysis, noise comfort surveys, screening surveys, noise abatement, noise complaints etc.). For such non-OSHA compliance applications, they would see nothing wrong with using one of our higher rated apps for measuring noise levels.

This study seemed to indicate the SoundMeter app was the most accurate.

Healthyhearing.com published an article which appears to have mainly been a review of the App reviews. This isn't really a study as far as we are concerned. Totally useless for the purposes of comparison, but we thought it would be interesting to include nonetheless because it proves without the studies above you'd have no clue which app is actually the best app to purchase. What follows below is a summation of their article:

Every day, we encounter a variety of sounds that hum, buzz, and ring and at safe noise levels. However, individuals of all ages sometimes risk exposure to harmful noises that damage the sensitive structure of the inner ear and cause permanent or temporary noise-induced hearing loss (NIHL). Inside the ear, small hair cells transmit electrical signals to the brain. These hair cells are often harmed or completely destroyed by extremely loud noises at home, in the workplace, and as we go about living our lives. Common activities like attending rock concerts, working with shop tools, and operating lawn mowing equipment, as well as one-time occurrences like explosions, can destroy these delicate hair cells, resulting in hearing loss and even annoying tinnitus, or ringing in the ears.

Luckily, with modern technology comes help in measuring the decibel level of sounds around us. We found some great smart phone apps that raise a red flag when users enter situations that reach noise levels that may contribute to hearing problems. The mobile nature of the smart phone makes it easy to take control of your health and hearing wherever you are, and avoid activities and locations that may be detrimental to healthy ears. Read on to learn more about our favorite iPhone and Android apps for measuring noise levels.

This app, created for iPhone, offers a way to measure audio volume in the environment around you. Created by Darren Gates, dB Volume Meter shows the approximate decibel level, or Sound Pressure Level (SPL), wherever you and your smart phone are located. Although quite accurate, the application is mainly a tool for detecting noise levels in casual settings such as at airports or loud music venues. Those operating heavy machinery, explosive devices, or exposing themselves to known decibel levels over 90 dB should rely on a professional SPL meter. The application provides useful examples of noises that may be over the dangerous 90 dB level, such as gun blasts at close range and jet take-offs. dB Volume Meter must be calibrated to work optimally and requires an external microphone, which is built in to the iPhone 4. This iPhone app can be downloaded at https://itunes.apple.com/us/app/db-volume-meter/id592769907?mt=8

TooLoud?, an iphone app, is a sound level meter tool that shows you the noise levels in your environment and warns you if you should be wearing earplugs. It’s often easy to take loud noises for granted as part of the necessity of living or working in certain conditions. TooLoud? provides decibel levels in a simple numerical display and allows you to specify filters and offset values for normal background noise. The offset value can be adjusted positively or negatively, to correspond to features in different microphones or other iOS devices. The Pro version is just $0.99 and removes the advertisements. TooLoud? is quite popular, receiving a 4 of 5 user rating on iTunes mobile app store, and can be downloaded here: https://itunes.apple.com/us/app/tooloud-pro/id425137981?mt=8.

This sound level meter application for the Android market is a simple tool that uses the smart phone’s microphone to measure Sound Pressure Level (SPL). deciBel displays the current, minimum, and maximum values of sounds around you, in decibels, and then turns this information into user-friendly sound level charts and graphs. The free application, developed by Peter Tschudin, offers help with calibrating the program as well as foreign translation. Explore this Android app and download it here: https://play.google.com/store/apps/details?id=bz.bsb.decibel&feature=search_result.

SoundMeter and SPLnFFT apps appear to be the best. University of Florida ranked SoundMeter as more accurate, but NIOSH and safetyawakenings.com rated the SPLnFFT as the most accurate.

Cause and Avoidance of Accidents Video

No comments were found for Are Those Inexpensive iPad Sound Measurement Apps Any Good?. Be the first to comment!