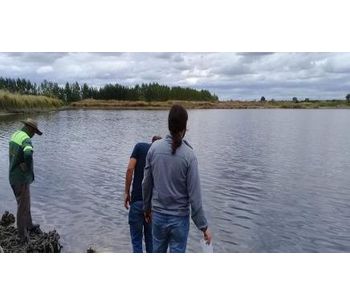 In Argentina, green-blue algae have made their appearance in various lakes and lagoons. Not only do they smell bad – they hamper the growth of aquatic plants, threaten marine life, and cause health issues in humans due to the release of cyanotoxins. Besides, excess blooms also affect local fishing and touristic areas.

This year, the Paraná Delta and parts of the Río de la Plata were polluted with cyanobacteria, which turned the waters green.

Health experts have been monitoring the Delta, and residents were warned not to enter or use the water of the shores and islands of Escobar, Tigre, and San Fernando.

Recently, the alerts were lifted, as the climate changed and the algae receded. However, people are now wondering why is it that they are allowed to bathe in the Paraná Delta but not in the Río de la Plata. The reason is industrial and sewage waste pollution, and strong currents. (Clarin)

The Río de la Plata may be considered a river, an estuary, a gulf, or a marginal sea. It begins at the junction of the Uruguay and Paraná rivers at Punta Gorda, and flows into the South Atlantic Ocean.

At the end of the summer, the spread of cyanobacteria and the formation of blooms are expected events in Argentina and its surroundings. As there is no one-size-fits-all solution, a combination of different methods is needed.

In the Gualeguaychú River, province of Entre Ríos, the green-blue problem is undeniable. Algae are rapidly growing and spreading in beach areas. Witnesses claim that the blooms occurred with the rise of the river, in places where the water remained stagnant.

Specialists warned people to avoid any contact with the water, as its color indicates the presence of cyanobacteria, which can be neurotoxic and hepatotoxic.

In El Viborón Lagoon, Maipú, the appearance of dead fish and birds prompted the General Department of Irrigation to monitor and investigate the lagoon on a weekly basis.

It is yet to be determined whether the tragic events are a consequence of harmful algal blooms or not. At present, the department is awaiting the results of the analysis which will conclude if the algae species present in the lagoon are toxic.

So far, three inspections have been carried out. In each of them, conductivity, pH, and oxygen levels were measured, and physicochemical and agrochemical samples were taken. It has been determined that the water has a high saline concentration and low oxygen levels. (El Sol)

No comments were found for Argentina’s Algae Challenge. Be the first to comment!