Due to limited clearance and accessibility, effective removal of settled sludge beneath tube settlers has long been a challenge for plant owners and design engineers. They needed a sludge removal solution with a low-profile design that would offer flexibility during operation and maintenance. In 2012, Brentwood introduced a new sludge removal system to fill those needs ─ SedVac. 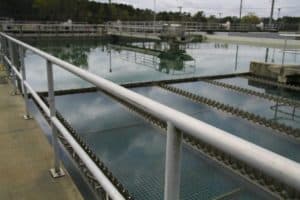 The test facility, Chelsea Water Treatment Plant, has a treatment capacity of 13 MGD and a flow rate of 12 MGD. It is supplied by surface water with a peak raw water turbidity of 110 NTU and average raw water turbidity of 35 NTU. The raw water is flash-mixed with aluminum sulfate as a coagulant prior to entering two identical settling basins, which are each divided into two sections. Located downstream of a 90 ft. x 90 ft. settling area, the pilot test area consisted of a 90 ft. long x 21 ft. wide rectangular area fully covered by tube settlers. The SedVac system operated beneath the tube settlers in one basin while a traditional header pipe system operated in the other basin, with both systems removing residuals by differential head.

During the testing period, both systems successfully maintained the basin effluent turbidity at below 5 NTU and the average solids removal efficiency above 95%. However, differences in operation were observed. To treat the same amount of flow with the same cleaning frequency, the SedVac system reduced wasted water by 60% compared to the traditional pipe system. Meanwhile, the discharged solids concentration was 3.7x that of the pipe system’s. Consequently, SedVac removed 40% more solids than the traditional pipe system each day:

Additionally, the sludge removal system run time was recorded for both basins over a 20-month period. Run time varied with the plant conditions, but on average, SedVac only ran 0.5 hours per day while the pipe system ran 2.5 hours per day.

Based on the pilot testing results, a return on investment analysis for a 20-year lifecycle was conducted for both types of sludge removal systems. It was found that the cost to recycle and treat the wasted water was the most prominent in the operations and maintenance (O&M) cost. With SedVac reducing the amount of wasted water by 60%, the O&M costs could be reduced by 47%! Realizing the benefits and cost savings of using the SedVac system, BJWSA purchased and installed a second SedVac system in November 2015.

No comments were found for Comparing Sludge Removal Systems For Water Treatment Plants. Be the first to comment!