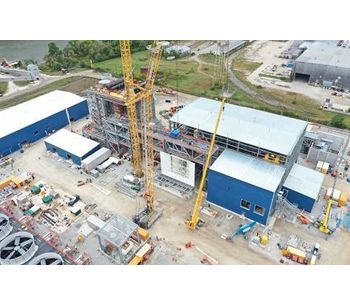 A lower-carbon revolution is brewing on the banks of the Ohio River. Next fall, in Hannibal, Ohio, a massive new gas turbine built by GE and running on a blend of natural gas and hydrogen will power a 485-megawatt power plant with enough capacity to light up the equivalent of 400,000 U.S. homes. Operated by Long Ridge Energy Terminal, a unit of private-equity companies Fortress Investment Group and GCM Grosvenor, the new plant is on track to be the first in the U.S. to use a large-scale gas turbine fired by a blend of hydrogen and gas, another milestone in the power industry’s journey to shrink its carbon footprint. “A lot of combined-cycle gas plants will transition to hydrogen in the future,” predicts Long Ridge Energy President Robert Wholey.

Electricity producers have already made big strides in the U.S., cutting carbon emissions mainly by shutting down and idling coal-fired power plants. With the emergence of natural gas and renewable sources like solar and wind, the industry’s carbon emissions have fallen by a third from their peak in 2007, according to the U.S Energy Information Administration. To extend that streak and hit future emissions targets, more operators are eyeing a new fuel source: hydrogen.

When combined with oxygen and burned, hydrogen - the most abundant element in the universe - could power a modern gas turbine with near-zero carbon emissions.

Above: Long Ridge will be the first purpose-built hydrogen-burning power plant in the United States. Image credit GE Gas Power. Top image: The sun is rising on hydrogen power generation. The sun itself is 91% hydrogen, the most abundant element in the universe. Image credit: Getty Images.

Gas turbines - whether new or retrofitted - can help the industry advance on the hydrogen journey by blending hydrogen with natural gas. More than 75 GE F- and E-class and Aeroderivative gas turbines, for example, have already amassed over 6 million operating hours running on hydrogen or hydrogen-like fuels, mostly waste products from steel mills and smelters. “It’s something we can do today,” says GE Gas Power’s Brian Gutknecht, whose team just published a white paper looking at the fastest ways to decarbonization.

And power plants fueled by natural gas and hydrogen, which can relatively quickly ramp up and down their output, also help bring more renewables into the power-generation mix by helping smooth supply gaps when the wind doesn’t blow and the sun doesn’t shine.

But the hydrogen revolution won’t happen overnight. The element may be abundant but because it likes to bond with other chemicals - like carbon and oxygen - it’s still expensive to make it pure. While natural gas costs $2 to $3 per million BTUs in the U.S., and around twice that much in Europe, hydrogen might go anywhere from $10 to $60 per million BTUs, depending on how it’s made.

Hydrogen gas also has a rather combustible personality. When burned, its flames gobble fuel at about 300 centimeters per second, 10 times faster than natural-gas flames. At that speed, the hydrogen flames can propagate back towards a turbine’s fuel nozzles and damage the equipment - a pesky problem called “flame holding” that GE addressed by altering the combustion systems of its turbines. GE has a variety of combustion system configurations, some of which are more resistant to this phenomenon. This includes its latest combustion system, the DLN 2.6e, which has the capability to operate on a 50% (by volume) blend of hydrogen and natural gas and can be found on GE’s latest and largest turbines like the HA.

As power plant sites go, Long Ridge has its charms. The new plant will sit atop an underground layer of salt, ideal for making caverns that can store large quantities of hydrogen for generating low-carbon electricity on demand.

A Long Ridge affiliate intends to provide electricity to customers that will locate on its 1,600-acre site, in addition to pushing electrons into the grid. Power-hungry data centers are likely potential customers. Alphabet’s Google, for instance, recently announced it will power all of its offices and data centers with carbon-free electricity on a 24/7 basis by 2030. Says Wholey: “Data centers won’t do long-term purchase agreements with fossil-fuel power plants these days, and our 7HA.02 is capable of blending hydrogen right out of the gate.”

At first, hydrogen will constitute just 5% of the turbine’s overall fuel mix. Running solely on hydrogen, which Wholey hopes to achieve over time, would eliminate up to 1.6 million tons of CO2 emissions annually - equal to the carbon footprint of approximately 160,000 American households. But boosting the concentration north of even 20% will demand GE’s DLN 2.6e system.

The company developed this system in partnership with the U.S. Department of Energy. It takes in hydrogen through hundreds of small nozzles - as opposed to six larger ones in a traditional combustor - thereby increasing the speed of the gas entering the combustor and preventing the flame from working its way back into the mixer. “At some point, Long Ridge will want to add more hydrogen than its current combustion system can handle and they can upgrade the system accordingly,” says Jeffrey Goldmeer, emergent technologies director at GE Gas Power. “That’s the beauty of the turbine: I can change out that combustion system.”

Another question with hydrogen is how to get enough of it. In the early months, Long Ridge plans to truck in some of the gas from a nearby, undisclosed industrial facility. (Many factories create hydrogen as a byproduct and feed it back into the turbines that drive their plants.) But Long Ridge’s long-term plan is to manufacture “green” hydrogen on-site. While most hydrogen is made via steam methane reformation - in which natural gas (CH4) reacts with steam under pressure and heat to produce hydrogen, CO and CO2 — green hydrogen is made through electrolysis. In this process, an electric current, derived from a renewable power source, splits water into its constituent elements to produce oxygen and hydrogen.

With access to plenty of water (from the Ohio River), underground storage and a more efficient manufacturing process on the horizon, Wholey thinks Long Ridge could become a “hydrogen hub,” supplying lower-carbon electricity on demand when nearby wind and solar power aren’t available. And, he adds, offsite customers could ink “virtual power purchase agreements” in which Long Ridge sends its electrons to the grid to help meet their overall emissions targets.

When wind and solar installations generate surplus electricity, say, on a sunny and windy Sunday afternoon, it can be used to split water. This regime would effectively turn hydrogen into a battery, helping renewables operators store their energy instead of shutting down their operations.

Wholey notes that prices for green-hydrogen-manufacturing components are starting to fall, as solar equipment costs did a decade ago. Meanwhile, several countries are crafting incentives to foster the development of hydrogen infrastructure. Says GE’s Goldmeer: “If society commits to decarbonization, and everyone is willing to make the additional investments, those will combine with government subsidies and other initiatives towards a lower-carbon economy and society.”

No comments were found for Hello, Hydrogen: A U.S. Power Plant Aims to Curb Carbon Emissions by Tapping Nature’s Abundant Element. Be the first to comment!