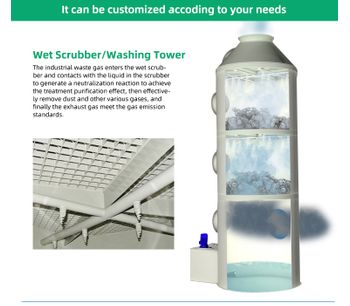 Introduction to the internal structure of the wet scrubber, spray device and defogging device

The organic waste gas is introduced into the scrubbing tower through the air pipe, and passes through the packing layer. The waste gas and the sodium hydroxide absorption liquid undergo gas-liquid two-phase full contact, absorption and neutralization reaction. Into the atmosphere. The absorption liquid is sprayed down at the top of the tower after being pressurized by a water pump at the bottom of the tower, and finally returned to the bottom of the tower for recycling. The purified organic waste gas meets the emission requirements of the local emission standards of Guangdong Province, which is lower than the national emission standards.

Used to separate the droplets carried by the flue gas. The mist eliminator of the absorption tower is arranged on the upper part of the last spray assembly on the top of the absorption tower. After the flue gas passes through the circulating slurry spray layer and then continuously flows through the mist eliminator, the droplets remain on the baffle due to inertia. Since the retained liquid droplets also contain solids, there is a risk of scaling on the baffle, and regular cleaning is required to remove the contained slurry droplets.

No comments were found for Introduction to the internal structure of the wet scrubber, spray device and defogging device. Be the first to comment!