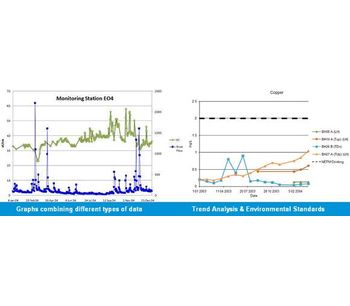 The Mann Kendall Trend Test is sometimes also named as Kendall’s tau test or Mann Kendell Test (or M-K test). This test is utilized for the analysis of data that is collected for a sufficient period for representing a continuous increasing or decreasing trends in Y values. This test is non-parametric, and it applies to all types of distributions known and therefore, does not need the data to meet any specified assumptions of normality. However, the data under study should depict no serial correlation. Simple linear regression can also be carried out if the data is not following a normal distribution. (Kayano, 2010; Streck et al., 2011).

Mann Kendall trend tests can be successfully carried out for finding the trends on the input of as low as four samples. The risk involved in such a practice lowers the number of data points increasing the possibility of not finding an accurate trend. However, a more accurate trend is obtained by the input of a larger number of data sets. The recommended number of minimum data sets is at least 8 to 10 in number.

The Mann Kendall test is used for modelling or evaluating the trend present in agrometeorological and hydrological time series (BLAIN, 2010). This method is also used extensively in the analysis of the detection of trends in annual temperature & precipitation in different parts/ countries of the world.

i. The null hypothesis suggests that there is no existence of any specific monotonic trend in the series under analysis.

ii. The alternate hypothesis suggests that there exists a trend. However, the trend can be negative, positive as well as neutral in nature.

Before conducting the test, the analysis should confirm the following things:

i. Data is not collected on a seasonal basis (i.e. data collected only during summer or winter period). It is due to the reason that the test will not work out successfully if the alternating upward or downward trend is present in the collected data.

ii. Any type of covariate (any factor that can impact your data that is plotted) should not be present in the collected data.

iii. Only one data point should be present per time period. If you have multiple points, use a median value in order to conduct the analysis.

As a consequence of the highly widespread use of this analytical method, different research studies have tried to fix the issues related to the strengths as well as limitations of this statistical test. Strengths of this methods are mostly linked with the simplicity of its concepts and also with it being a non-parametric procedure - which is not assuming any specified joint distribution of the data. This results in the minimal effects caused by the departures from normality. However, studies have associated the limitations of this trend test with its null hypothesis, that suggests that the collected data is independently and identically distributed.

ESdat Desktop is a powerful importing, analysis and reporting tool; used to validate, import, analyze and report a broad spectrum of Environmental Data. ESdat Desktop provides a comprehensive range of analysis functions, replicating or extending those available through the ESdat Web Interface. Mann Kendall and Linear Regression trend graphs can be produced for any time-series data. Features of graphs include:
Trends - Mann Kendal or Linear Regression trends can be produced and annotated on the graph (TUp, TDn & LH = Trending Up, Trending Down, Last value Highest)

- Environmental guidelines / Action Levels can be included.
- Produced in Excel and can be saved and opened directly in Excel and update live from the database.
- Templates can be customized.

For more information on ESdat Data Management Software and its use for trend analysis and graphs, please visit esdat.net

No comments were found for Mann Kendall Trend Tests. Be the first to comment!