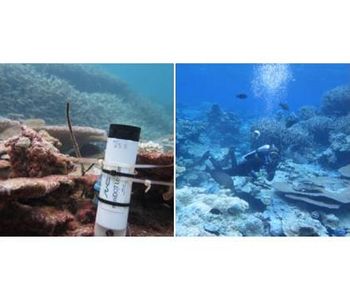 Taking the Pulse of the Ocean

Temperature and pH measurements can yield important information about how the physical environment of the ocean responds to warming and increasing levels of carbon dioxide in the atmosphere as well as global weather patterns. Different ecosystems within the ocean respond differently to these physical changes, making it important to take measurements from multiple locations.  Dr. Jennifer Smith’s lab at the Scripps Institution of Oceanography (SIO) has been continuously measuring ocean temperature and pH locally in San Diego and at the remote Palmyra Atoll for the past six years.

Recently, in addition to temperature and pH, Dr. Smith’s team began to measure dissolved oxygen (DO) in the seawater, using miniDOT loggers made by Precision Measurement Engineering (PME).

Health of the Ecosystem

Measuring oxygen levels can tell researchers about the health of the ecosystem; the balance between plants and animals, life and death, and about the physical mixing of the water in that ecosystem.

Factors Influencing the Amount of Dissolved Oxygen in Seawater

Oxygen can be introduced to a body of water in two ways: 1) as a byproduct of photosynthesis by phytoplankton and marine plants and algae and 2) through physical mixing of water, usually by wind and waves.

Oxygen can be depleted from the water in two ways: 1) by animals, including fish, breathing underwater and 2) during the breakdown of organic matter by bacteria.

On the coral reefs of Palmyra Atoll, the amount of DO in the seawater varies on a daily cycle, with levels peaking during daylight hours while photosynthesis is occurring and decreasing throughout the night as photosynthesis declines, as seen in the following chart.

During daylight hours, photosynthesis levels are so high that DO levels often exceed 100% saturation and divers can actually watch oxygen bubbling out of the seawater. The sensors in Palmyra are attached to a living biological structure in relatively calm water, making photosynthesis (or its absence) the primary factor in DO levels.

In the San Diego nearshore environment, DO levels vary much less on a daily cycle. This indicates that there is much more influence from the physical environment (wind and waves) than from the biological community in that habitat.

The miniDOT logger is a completely submersible instrument that logs dissolved oxygen and temperature measurements. The oxygen sensor is an outpode that measures dissolved oxygen concentration in water through a fluorescence method. Data are recorded to an internal SD card. Setting the time and sample interval can be accomplished via USB cable.

For more information on how PME’s miniDOT loggers and other products can help with your research project, contact us today.

No comments were found for Measuring Dissolved Oxygen Levels in Seawater - Case Study. Be the first to comment!