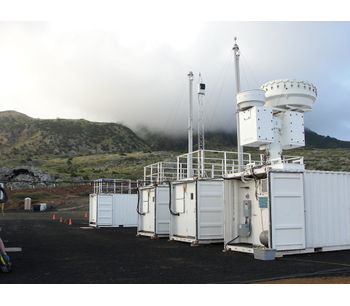 From June to October, the burning of agricultural fields in southern Africa creates smoke that blows west across the southeastern Atlantic Ocean and reaches Brazil, over 4,500 miles away. Using Micro Pulse LiDAR (MPL) and other instruments, researchers at the Atmospheric Radiation Measurement (ARM) user facility on the remote island of Ascension, operated by the U.S. Department of Energy, collected data for 16 months to help understand how these airborne particles impact the climate.

Better Data Needed in Climate Models
Biomass burning (BB) produces aerosols that enter the atmosphere. A significant amount of this particulate matter consists of black carbon and other carbonaceous aerosols that absorb light, warming the atmosphere; however, if the underlying surface is a dark ocean, the particles reflect light, cooling the atmosphere. Scientists need accurate measurements of each type of aerosol in the layers of the atmosphere to study the movement and long-term consequences of the smoke.

Currently the vertical extent of the BB aerosol layers transported far from the sources is poorly represented in global climate models. To help improve the models, ARM deployed one of its mobile atmospheric observatories for the Layered Atlantic Smoke Interactions with Clouds (LASIC) campaign from June 2016 to October 2017 on Ascension Island, about 1,000 miles off the west coast of Africa. From this unique location, researchers recorded measurements from numerous instruments to compile a comprehensive dataset representing two BB seasons.

Micro Pulse LiDAR Used in LASIC Research
ARM launched the LASIC campaign specifically to gather data on how smoke properties (i.e., ability to absorb shortwave radiation) change after long-range atmospheric transport, as well as the smoke’s effect on clouds. While aerosol surface measurements were available from multiple instruments, to study the vertical structure and the monthly and seasonal variations of the BB aerosol layers transported to this remote island, it was important to include profiling instrumentation.

“One of the critical MPL capabilities for LASIC is its dualpolarization capability, which allows discrimination of smoke, dust and sea salt aerosol layers above Ascension Island,” said Paytsar Muradyan, Argonne National Laboratory researcher. “Also, the ARM mobile facilities are frequently deployed in remote locations around the world, and MPL is capable of providing unattended continuous observations of clouds and aerosols.”

Raw MPL measurements consisting of profiles of backscattered signal from atmospheric particles were collected throughout the LASIC field campaign. The ARM Data Center (ADC) ingested hourly raw data along with the MPL corrections, and Climate and Forecast (CF) standardized NetCDF files were archived at the ADC to help validate results.

Results of the Study
The analysis of the monthly variations of the retrieved extinction profiles provides a first look into the “evolution” of the pre-BB and BB season aerosol vertical structure and elevated smoke layer depths over Ascension Island. High amounts of aerosols that can affect the Earth’s energy balance and cloud properties are common in the marine boundary layer during the southern African burning season (June-October).

The MPL data show that the smoke layer is present mostly above boundary layer clouds between 1.5 to 3 km at the beginning of the burning season in July and extends up to 4 km in September. Occurrences of the BB smoke layers coincide with the peak black carbon concentrations (>1000 ng/m3) observed at the surface, suggesting that these aerosols are strongly absorbing, as back trajectories indicate that they originate from the same continental BB regions.

“The data collected during LASIC improve our current understanding of aerosol vertical distribution and their radiative impact,” says Paquita Zuidema, PI of the LASIC campaign. “This will ultimately lead to improved accuracy of long-term climate forecasts and help us develop sustainable solutions to energy and environmental challenges.”

No comments were found for Micro Pulse LiDAR measures aerosols caused by biomass burning - Case Study. Be the first to comment!