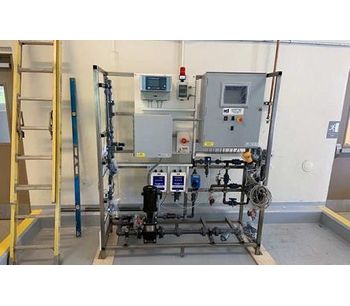 Courtesy of International Dioxcide Inc a division of ERCO Worldwide

The central water treatment department saw a need to improve their trihalomethane (THM) levels, which are a byproduct of the disinfection process using chlorine. An engineering firm was hired to evaluate the use of chlorine dioxide, and International Dioxcide was chosen to execute a trial. The project approach was a treatability study, bench testing, pilot testing, demonstration study and a full-scale installation. The water quality objectives included:

The plant draws surface water from two creeks and has a typical plant flow of 2.8 to 4.3 MGD. It typically runs at a set rate to fill the water storage tank in the system. When the tank is full, the ClO2 generator shuts down. The ClO2 dose is applied ahead of the six filters. Typical dosages are in the 0.6-0.8 ppm range. The new installation allows for several different dosing points to meet the treatment needs as the water conditions change.

One of the main advantages when switching to chlorine dioxide at this water utility is the use of gas chlorine. This utility has embraced gas chlorine at their other plants, which allows them to easily convert over to ClO2 and take advantage of the low cost and easy maintenance of the gas chlorine/chlorite chemical reaction generation process. Each plant has noticed improvement in water quality using ClO2. Presently, they have no carbon to quench the chlorite in the finished water, so their dosage is limited to 0.8ppm, to avoid  exceeding the MCL for the chlorite ion by-product.

Additionally, the plant uses chloramines in the distribution system and the manager noted that historically they had to drain the storage tank annually to clean it. Since they have been using ClO2, they have not needed to flush the system, which is probably due to the low levels of chlorite ion in the finished water, mitigating the nitrification formation.

Upon completion of a successful trial, this Mid-Atlantic water utility commissioned its first ClO2 generation system. The new generator uses a two-part gas chlorine gas and 25% sodium chlorite reaction chemistry. The generator is an ADOX™ MGII flow-paced model with an Optek analyzer to measure ClO2 residuals on the discharge of the generator. International Dioxcide also made available a bulk tank for the ERCOPure(™) EPA-registered sodium chlorite solution. The ADOX™ MG II trial generator unit has completed projects at several of their additional plants with favorable results leading to additional permanent equipment installations.

No comments were found for Pennsylvania Water Utility Converts to Chlorine Dioxide - Case Study. Be the first to comment!