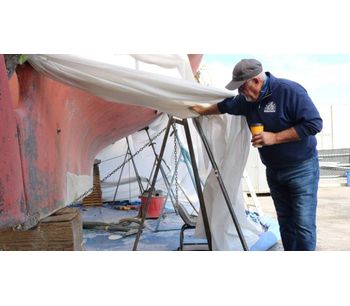 Pollution is washing from boatyards into Puget Sound. Who’s responsible?

Phil Riise worries about every single particle of pollution that washes from his waterfront business, Seaview Boatyard North, into Bellingham Bay.

It’s partly because he cares about the body of water, where he fishes and crabs for sport. But it’s also because just a little too much pollution could take a large financial toll on his livelihood - boatyards that don’t meet state stormwater pollution standards are required to explore significant operational changes, which Riise said can quickly snowball into a costly endeavor.

“It’s a huge deal for any boatyard to stay in business and be in compliance with state stormwater pollution standards,” said Riise, who has worked in the boatyard industry for five decades. Boatyards are facilities where vessels are stored, maintained and repaired. Seaview Boatyard North typically holds around 40 vessels at a time, Riise said.

Riise was required to make adaptations in 2019 at both his Bellingham and Seattle boatyards, after significant amounts of pollutants were found in stormwater samples. The stormwater management system cost him roughly $500,000, he said, but pollution levels have been much lower since.

For about a decade, Washington has been attempting to figure out how to best regulate boatyards and their pollution. It’s trickier than it sounds — while stricter rules improve water quality and benefit marine life, they can also put boatyards out of business, since they have to pay for consulting and equipment, local industry members say.

The pollution that comes from boats and boatyards is primarily copper and zinc, which are elemental metals that can be toxic to salmon and other marine creatures at certain levels, according to the Natural Resources Defense Council.

“The irony with both copper and zinc is that they are central metals for organisms,” said Kirsten McDade, pollution prevention specialist for Bellingham-based environmental nonprofit RE Sources. “But you go just a little over natural background levels, and they become highly toxic.”

It’s actually their toxicity that make zinc and copper so useful to boat owners — they are common ingredients in anti-fouling paint, which is applied to prevent algae, barnacles and mussels from growing on boat hulls, according to the Pacific Northwest Pollution Prevention Resource Center. Excess copper disorients salmon, impacting their ability to smell and sense vibrations, which makes them more vulnerable to predators, according to the Natural Resources Defense Council.

The processes that take place at boatyards, such as sanding, dislodge tiny bits of the metals that wash into the bay when it rains, McDade said. In Bellingham, there are four state-permitted boatyards. In the last five years, these boatyards have all reported copper and zinc concentrations in stormwater samples that are high enough to trigger state requirements that the companies better control pollutants, according to state Water Quality Permitting and Reporting Information System data analyzed by The Bellingham Herald.

“It seems ironic that we do allow any pollution at all,” McDade, from RE Sources, said. “I feel like we should have zero-discharge permits. You shouldn’t be allowed to pollute at all.”

The New Rules Are Slow Going

Copper-based anti-fouling paint was supposed to have been banned in Washington state years ago, but questions about viable alternatives have slowed tangible action.

In 2011, Washington passed a law that would ban the use of copper-based anti-fouling paint beginning in 2018, according to a 2019 Department of Ecology report. But that date was pushed to 2021 after a 2017 report found that some alternative anti-fouling paints may actually be more harmful to the environment. In 2020, the state again delayed action until 2026, under Department of Ecology guidance that more research is needed.

“Once there is a real alternative to copper paint, we expect that will really help the boatyards,” said Colleen Keltz, water quality communications manager for the Department of Ecology. The department is continuing research on alternatives, and the most recent budget passed by the state Legislature includes funds to hire staff to assist with the effort.

But Kelly Larkin, who manages the boatyard at Anacortes-based Skyline Marine Center, doesn’t think it’s completely fair that boatyards are the ones held mostly liable for pollution from a different industry. “They don’t regulate the copper paint industry, so people continue to use it which continues the problem,” Larkin said. “We are put in the middle of it.”

Larkin’s boatyard is one of a dwindling number of facilities in Puget Sound that allow boat owners to do maintenance and repairs on their own vessels, he said. This type of facility is known as a do-it-yourself boatyard, and Larkin said it becomes increasingly difficult to offer as pollution regulations tighten. Seaview Boatyard North, the Bellingham-based facility, proves his point — it stopped allowing people to do work on the bottoms of their boat in order to meet state stormwater quality standards, owner Riise said.

“I’ve never been able to get even well-intended customers to comply with our rules in the yard,” he said.

The Department of Ecology is pushing to make boatyard stormwater regulations regarding copper pollution more stringent in this year’s revamp of the Boatyard General Permit, a permit that all boatyards must have, Keltz said. The permit is reviewed and reissued every five years. Boatyards currently have to sample their stormwater once a month in January, April, May, October and November. One of the proposed permit changes would lower the amount of detected copper that triggers boatyards to take adaptive steps to improve their stormwater quality, Keltz said.

But it’s not a popular move among boatyard managers, Keltz said, considering many are already exceeding current benchmarks for zinc and copper. Benchmark exceedances are typical throughout Puget Sound, Keltz said, and do not mean a boatyard has broken any water quality laws. However, they’re still a concern when it comes to maintaining clean water, she said.

The actions boatyards have to take to control pollutants depends on how many benchmark exceedances they’ve had in the past. Examples of adaptive actions include conducting an official inspection, compiling a report that examines stormwater treatment options and hiring a licensed professional engineer.

Some of these actions can cost tens of thousands of dollars, especially if an engineering firm needs to be hired, according to multiple Puget Sound boatyard managers.

There is one point of agreement between boatyard manager Larkin and McDade, the pollution prevention specialist advocating for stricter boatyard regulations: The state Department of Ecology needs to offer more support and outreach to boatyards attempting to comply with the regulations.

“They want to be able to show they’ve tightened this permit more as a way of patting themselves on the back,” Larkin said. “But when you go to them and say ‘Help us navigate this whole thing,’ you get nothing, especially since COVID has hit.”

He wishes that the Department of Ecology would connect boatyards with the companies, contractors and engineering firms needed to address copper and zinc benchmark exceedances. Unfortunately for Larkin, this is not possible, according to Keltz, the water quality communications manager at the department.

“Ecology cannot show favoritism by suggesting companies, contractors, or engineering firms to boatyards that have corrections to make,” she wrote in an email to The Herald. The department does offer technical assistance to boatyards addressing benchmark exceedances, Keltz said, and there are documents online outlining the best practices for managing pollution, such as treating stormwater and vacuuming the dust that comes off a boat being sanded.

But at the end of the day, boatyards have the responsibility to spend money and time managing copper and zinc pollution, Keltz said.

“There are costs related to preventing pollution from entering the water,” Keltz wrote in an email. “We do try to provide flexibility as much as possible, but in the end, permittees must protect water quality.”

RE Sources organized a boatyard pollution prevention workshop in 2020, bringing together boatyard managers, Department of Ecology staff and the cty of Anacortes, McDade said. It was successful, with 22 attendees, McDade said, but she thinks these sorts of events should be organized by the department itself. “That shouldn’t be our job,” McDade said. “That should be Ecology’s job.” These shortcomings are part of a larger problem, she said: The state’s natural resources departments are underfunded and understaffed, in her opinion. “I can’t blame anybody,” McDade said. “But the reality is that pollutants are going into the water.”

By Ysabelle Kempe (360-230-8004). Ysabelle Kempe joined The Bellingham Herald in summer 2021 to cover environmental affairs. She’s a graduate of Northeastern University in Boston and has worked for The Boston Globe and Grist.

Phil Riise owns Seaview Boatyard North in Bellingham, as well as a facility in the Fairhaven neighborhood and a boatyard in Seattle. He has spent roughly $500,000 on equipment such as this filtration system in order to meet state stormwater pollution standards. Ysabelle Kempe THE BELLINGHAM HERALD

No comments were found for Pollution is washing from boatyards into Puget Sound. Who’s responsible?. Be the first to comment!