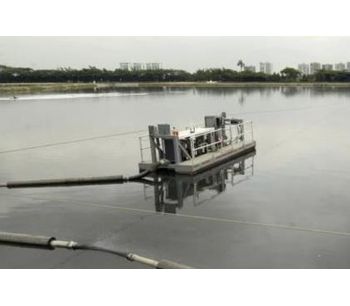 Project - A Crisafulli Dredge in Ecuador

SRS Crisafulli, Inc. was chosen in January 2017 as the dredging supplier for a multi-million-dollar renovation to the water treatment plant oxidation lagoons in Guayaquil, Ecuador. The remote-controlled diesel dredge equipment was delivered in July, 2017. Installation and training was provided by engineers from the Eastern Montana manufacturer in October 2017.

Population growth in the largest city in Ecuador increased sewage processing requirements by more than 20%, overwhelming the system. Air quality had led to complaints from residents in Guayacanes of persistent bad smells.

The RDF75 model Crisafulli Dredge is pumping municipal sludge to a drying bed to reduce the smell pollution. The plant currently receives water borne waste from about 10% of the community, roughly 200,000 connections.

The water and sanitation services in Guayaquil were privatized in 2001, backed by $18m from the World Bank and $40m from the Inter-American Development Bank. The contract was won by a consortium of international companies called Interagua. The privatization was meant to improve sewerage and clean water provisions, particularly for the poor of the city. (1)

The French company Veolia bought a majority stake in Interagua in 2008. Veolia, which provides water, waste and energy services to councils across the globe, is responsible for providing drinking water and sewerage facilities across the city. (1)

Crisafulli is proud to be one of Montana’s top international exporters and to have been chosen by the Ecuadorians for the project.

No comments were found for Project - A Crisafulli Dredge in Ecuador. Be the first to comment!