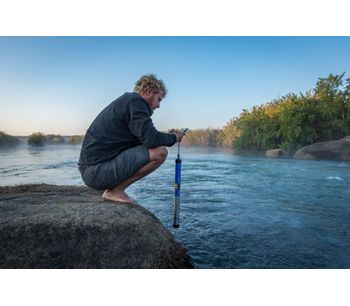 As part of the National Geographic Okavango Wilderness Project (NGOWP), researchers are using Aqua TROLLs to monitor water quality in the remote river basin, returning annually to collect baseline data with the goal of protecting one of Africa’s most biodiverse landscapes.

Just back from a two-month expedition in the wilds of the Okavango Delta, in Southwest Africa, NGOWP team members Rainer von Brandis and Götz Neef need no reminder of the challenges of data collection in one of the most remote and biodiverse regions on the continent.

Their latest journey along the Okavango River, from Namibia’s northern border with Angola to the Okavango Delta in Botswana, was the latest in a series of trips to explore all the major rivers that sustain the delta and collect data on virtually every aspect of the environment, including water quality, water discharge, biodiversity and climate.

Since 2015, a small team of researchers and regional experts has made more than a dozen river trips, paddling thousands of kilometers in dugout canoes called mekoros and collecting data critical to understanding environmental change in the region. Specific to water quality data collection, the team needs instrumentation suitable for spot checking along the route and for continuous water monitoring at several permanent stations.

On the river trips, Research and Collections Manager Götz Neef uses the Aqua TROLL 600 for spot checking. Every 10 kilometers he collects data on dissolved oxygen, pH, ORP, temperature and nitrate, with a separate device used to measure turbidity.

Neef carries two Aqua TROLLs, in case he needs a spare. “Space is limited on the boat, so it’s helpful that they’re compact, and you can measure multiple parameters with one device,” he says. “The Aqua TROLL is easy to use, robust and completely submersible.”

Aqua TROLL 600s are also deployed at three permanent monitoring stations in the delta, and plans are underway to install eight more stations, which will be outfitted with Aqua TROLL 500s. “We’ll have solar power at those locations, so we won’t need the battery power the 600 provides,” Neef says.

The continuous monitoring stations collect and transmit data on...

No comments were found for Researchers Collect Critical Water Quality Data on Multiple Trips to Africa’s Okavango Delta. Be the first to comment!