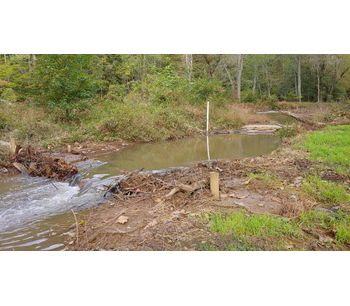 The streams on the Bacon Ridge Branch site were deeply incised. Historic agricultural land use combined with runoff from surrounding development activity upstream had carved steep banks four to ten feet deep that were actively eroding, and the stream had lost connection with the surrounding wooded floodplain. Instream habitat and near stream hydrology was compromised with invasive species dominating the surrounding area.

While there was evidence that wetlands and wetland hydrology had once characterized the entire floodplain, little wetland hydrology remained prior to completing the project. It was anticipated that restoration of the main stream channels would restore groundwater elevations and wetland hydrology, but to what extent was unknown. For GreenVest, a leader in ecological restoration, the opportunity to restore multiple environmental features with one project was a worthy pursuit.

To assess the effectiveness of restored stream/floodplain hydrologic connection and increased groundwater levels that, in turn, could revive wetland function, the team planned three transects and installed Rugged TROLL 100s in shallow groundwater wells at 50-foot, 100-foot, 200-foot and 300-foot distances from the stream to measure pre- and post-construction groundwater levels.

The transects were deliberately placed outside of delineated wetland locations to determine whether stream restoration efforts could restore hydrology and thus lost wetland function. For each transect, the team also placed a Rugged TROLL in the stream to compare changes in groundwater elevation to stream water surface elevations.

While restoration of wetland hydrology was a project objective, quantifying it by measuring the distances at which groundwater levels were affected was not a regulatory requirement, so GreenVest sought a cost-effective solution to conduct this research. GreenVest Project Manager Laura Kelm says she selected Rugged TROLLs because they’re small, durable, inexpensive, and easy to use.

“We’ve had good experiences with In-Situ products in the past, and when I looked at the options for an affordable, unvented logger, the Rugged TROLL, along with a Rugged BaroTROLL to log barometric pressure and temperature, seemed like the best equipment to have on site,” says Kelm.

Results
In the two years since GreenVest completed construction and deployed the loggers...

No comments were found for Stream Restoration Project also Recharges Groundwater and Revives Wetlands. Be the first to comment!