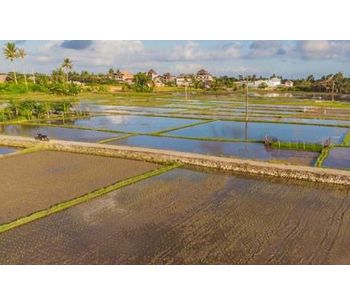 Arsenic toxicity now plagues many surface water and groundwater resources worldwide, with widespread and tragic consequences for public health in countries including Vietnam and Bangladesh. When microorganisms “eat” substances that contain the toxic metalloid, they release it into drinking water resources.

Many researchers theorized that the microbes freeing arsenic from the soil were feeding on algae and plant matter near the surface, but now Professor Andreas Kappler of the University of Tübingen and his team of geomicrobiologists have made a surprising discovery: In most cases, organic compounds held in deep sediments are fueling the process. Equally surprising is the newly discovered supporting role methane plays in the process.

Many regions have significant arsenic contamination problems. These include Latin America, where 4 million or more inhabitants of Argentina, Chile, Mexico, El Salvador, Nicaragua, Peru and Bolivia are affected. Mining activity, and to a lesser extent, pesticide use, are frequent sources of contamination there.

In Bangladesh, however, where as many as to 77 million people risk drinking arsenic-contaminated water, the source is natural. The World Health Organization has called Bangladesh’s arsenic crisis “the largest mass poisoning of a population in history,” dwarfing both the Bhopal and Chernobyl disasters.

The first cases of characteristic skin lesions from arsenic were noticed in West Bengal and Bangladesh in the 1980s, and groundwater from tube wells was identified as the culprit. A long list of serious health risks associated with arsenic consumption is dominated by developmental problems and cancer.

Such arsenic-related health outcomes are common on river floodplains in South and Southeast Asia, where populations are dependent on groundwater from shallow wells. Approximately 20% of Vietnamese citizens must routinely drink arsenic-laden drinking water, and 200,000 cases of cancer there have been blamed on water pollution.

Role of Methane in Arsenic Contamination

When the researchers observed high concentrations of methane in arsenic-contaminated groundwater from the village of Van Phuc, Vietnam, they wondered if the gas might be the energy source for bacteria that mobilize arsenic.

In the team’s experiments, methanotrophic bacteria used organic carbon in methane as an electron donor to reductively dissolve the minerals, freeing sequestered arsenic. Methane is commonly found in aquifers contaminated with arsenic. The discovery of this new pathway for arsenic mobilization, coupled with the common co-occurrence of methane and arsenic in aquifers, drives a strong inference that the arsenic contamination of groundwater resources in Southeast and South Asia probably comes as a result of microbial reductive dissolution of minerals in sediment.

The researchers hope the discovery of the arsenic-methane link will become an important tool for scientists as they try to predict emerging arsenic contamination hot spots.

Treatment of arsenic-contaminated water can be expensive and difficult. A wide variety of technologies are used to remove arsenic from water, including membrane filtration, oxidation, chemical precipitation, coagulation, ion exchange, and adsorption with specific media. When determining which technology to use, decision-makers should consider several factors, such as source-water quality, available space, disposal options for byproducts of treatment, and, most importantly, the presence of other contaminants.

Contact Fluence to learn more about our sustainable solutions for removing arsenic from water and the Smart Packaged technologies that can deliver safe water anywhere in the world.

No comments were found for Surprising Methane-Arsenic Connection. Be the first to comment!