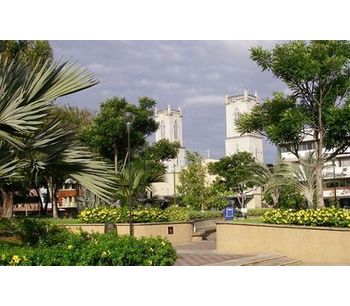 On the west coast of Panama near the Costa Rican border lies David, capital of the Chiriquí province. It’s the largest city in western Panama, with a population of approximately 83,000. David is a relatively affluent city, with many quiet neighborhoods of detached homes. But unfortunately, for a decade the smell of sewage was overwhelming in some parts of the city.

On the edge of one such neighborhood, Villa Mercedes, the oxidization lagoons for the David wastewater treatment plant were overwhelmed with organic load and struggling to do their job. Caimans, lizards, turtles, and birds that had once frequented the lagoons departed, leaving only mosquitos and algae thriving. With average high temperatures reaching into the 80s and 90s F year-round, the smell often was overwhelming.

Panama’s water authority, CONADES, faced with dredging the lagoons once again, was ready to try something new. After some experimentation, CONADES settled on an approach based on a combination of mixing and biological solutions. IOS Biotechnologies subsidiary Blackwater Panama executed the project with the help of Fluence’s LumenAER mobile mixer and Fluence support.

The LumenAER, with its small solar array, boasts a simple and elegant design that contains only the technology necessary for the job.

Large, wired water circulators designed for large ponds can fail because they may treat just one section of the lagoon, leaving large areas untouched. Despite its small size and slow mixing, a solar-powered LumenAER unit — untethered by power cords — can be floated around a large body of water to mix all areas while lowering energy costs and eliminating headaches.

CONADES allowed 12 months for successful completion of the project, but all the targets were achieved in just eight. Fluence provided a fully supported solution, including equipment, and remained involved in the project from commissioning onward, guiding the clients with advice on best practices.

In the combined process used at the David plant, aerobic bacteria and facultative bacteria work together to supercharge the aerobic stabilization (oxidation) of organic matter in a lagoon, with the LumenAER covering the surface to distribute the beneficial microorganisms evenly throughout.

The David project is a significant demonstration of LumenAER’s effectiveness in helping with load removal when used on a large body of water. To date, the combined technologies approach is being used in Panama at David and in four similar projects, which were commissioned after the success at the David plant; three more projects are in the works. The remediation takes an average of 8-12 months, start to finish, with no dredging required.

As a biological indicator, tilapia fish have been stocked in the wastewater treatment lagoon system at David as living water quality monitors. The tilapia are thriving. The caimans, turtles, lizards, and birds have returned. And the odor has gone.

Contact Fluence for more information on how the LumenAER can help with your wastewater treatment needs, or to learn more about our other sustainable aeration and mixing solutions.

No comments were found for Technologies Work Together in WWT Lagoon Rehab. Be the first to comment!