That air conditioner noise is annoying!

International standards organizations (ISO, ANSI and ASA) recognize the need to objectify judgements on the amount of ambient noise in enclosed spaces, and provide us with definitions for various Noise Curves.

Regulations and building design documents often stipulate that the ambient noise in an unoccupied room should not be louder than a particular noise rating.

What are Noise Curves?
When measuring ambient noise one has to consider the full range of audible frequencies. Figure 1 is an example of a spectrum of ambient noise measured in an office. One might say that this spectrum could be rated with the single value 48dB, this being the highest Sound Pressure Level (SPL) across the range (at 63Hz). No point on the entire spectrum is above 48dB. 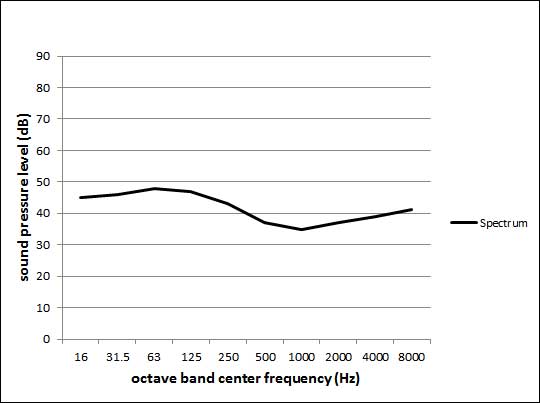 To then give the same rating to all rooms that have a maximum ambient noise level of 48 dB (at any point in the ambient noise spectrum), is a little simplistic because we are concerned with the human annoyance factor; we have to consider that people find higher frequencies more annoying while we are more tolerant of lower frequencies. In Figure 2, curves are added that consider this weighting. These are the so-called Noise Curves. The particular curves in Figure 2 are Noise Criteria (NC-2008) curves. 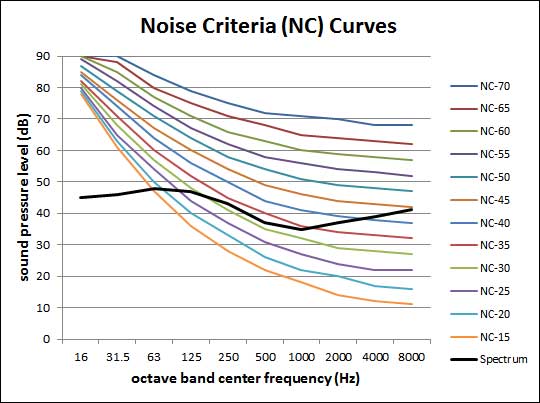 The lowest curve that is still above the measured spectrum is NC-46. We therefore say that the room measured has an NC-46 rating.

Notably, in Figure 2, the point on the spectrum that touches the NC-45 curve is at 8000 Hz. Therefore attenuating the cause of the high frequencies in the ambient noise by 5 or 6 decibels would give the room a better noise rating, and ultimately reduce the annoyance factor of that background noise to an acceptable level – job done!

Measuring Noise Curves with XL2 Analyzer
The XL2 Audio and Acoustic Analyzer, is a handheld acoustic measurement tool that allows you to measure Noise Curves at the press of a button, and immediately provides reports on the internal SD card.

The XL2 is used extensively for measuring Noise Curves in offices and factories, while the device is also trusted by acoustic consultants for measurements in concert halls and broadcast studios where low Noise Curve ratings are critical.

The XL2, with the Spectral Limit Option installed, measures all supported Noise Curve types at the same time, allowing you to switch to your required report after the measurement. The result also indicates the frequency band, between 16 Hz and 8 kHz, that makes the most significant contribution to the noise rating, so that you know which frequency should be reduced to improve the rating.

For RNC curve types the XL2 reports any large fluctuations or surging at low frequencies, e.g. caused by fans.

No comments were found for That air conditioner noise is annoying!. Be the first to comment!