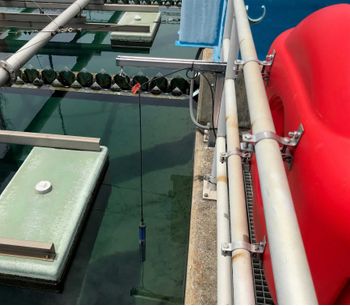 Charged with producing clean drinking water for approximately 300,000 people in the city of Tuscaloosa and the surrounding area, Ed Love Water Treatment Plant Chief Operator Heath Plowman was in the market for a cost-effective water quality monitoring solution that would help him control costs and stay in compliance with ever-tightening EPA regulations.

In-Situ’s Aqua TROLL 600 Multiparameter Sonde turned out to be exactly what Plowman was looking for. What appealed first was the capability to monitor turbidity, pH and temperature with one instrument. That meant he could keep an eye on his four settling basins with only four pieces of equipment, rather than eight or twelve. Another plus was the ease with which the Aqua TROLL 600 integrated with the plant’s SCADA system.

“The Aqua TROLL transfers data to my operators in real time, so we have a quicker response time to upsets and don’t have to go to a location and physically download the data,” says Plowman. “Before we were monitoring on a weekly basis, which increased the likelihood that we could miss our optimization window. Now we can see and address issues right away.”

Another advantage, says Plowman, is sensor accuracy. His operators take calibrations every month, and in the 11 months they’ve had the equipment, Plowman says drift has been virtually nonexistent. “We haven’t seen anything over point two on the pH the whole time we’ve had them,” he says.

Another benefit is the ability to easily move the sondes around the basins. “I can unscrew the probe from communication and move it to a different location, and the internal SD card captures the data,” Plowman says. “It’s not real-time, but it’s easy to walk up, wake it up and get a reading with a Bluetooth connection.”

That flexibility makes it easier to confirm that water is being evenly distributed in the basins. Plowman can mitigate the risk of a short circuit that could cause more floc to carry over, putting an additional burden on the system and increasing the time and cost to backwash the filters.

It’s a balance, says Plowman. He’s always trying to get everything he can out of the system that moves raw water from Lake Tuscaloosa to the taps of city and county residents, while containing costs and maintaining optimal performance.

Equipment that makes it easier to strike that balance and helps keeps the plant in compliance with increasingly stringent regulations is essential. For Plowman, the Aqua TROLL 600 is part of the answer.

“The Aqua TROLL 600 has been a very cost-effective way to deliver the results I was looking for,” he says. “Regulatory windows keep getting smaller, and the real-time data and reliable accuracy help keep us where we need to be.”

No comments were found for Treatment Plant Finds Aqua TROLL 600 Key to Cost-Effective Optimization - Case Study. Be the first to comment!