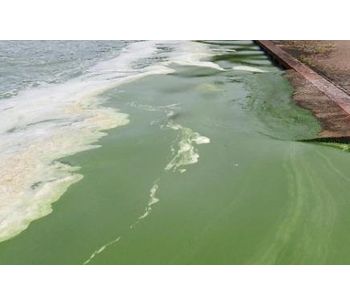 Blooming of (toxic) algae is a global problem that increases each year due to pollution and climate change. In order to restore our aquatic ecosystems, actions must be taken that address excess algal growth.

Over the past years, innovations around lake restoration and algal bloom remediation have been introduced and tested. One of these methods is the use of interactive systems that control algae by using ultrasonic sound waves.

With every new technology, it is important to study the effect on algae, as well as on the rest of the ecosystem it is introduced into. This article addresses the most common concerns about the use of ultrasonic sound waves in lakes based on research performed by different universities.

Interactive algae control technology, also known as monitor-predict-control (MPC) technology was developed based on a large research grant from the European Commission[1]. The technology has been developed as a collaboration between:

The results of these studies is the development of the MPC-Buoy, which is a solar powered buoy that uses in-situ, real-time water quality monitoring to identify and predict algal growth and autonomously applies specific ultrasonic frequencies to match the algal type in the waterbody.

At the basis of the research has been the development of a database that contains algal types, water quality information and matching ultrasonic parameters. This database operates an algorithm that drives ultrasound program changes on the MPC-Buoy unit. This database is automatically updated with every new reading any of the MPC-Buoys make all over the world.

When a waterbody suffers from algal blooms, solutions are most often sought in the form of reducing phosphate, which is the key nutrient that algae and cyanobacteria consume to grow. However, aside from phosphate, light is also a critical resource for all phytoplankton.

Manipulating light as a way to reduce cyanobacteria is a feasible method that has been recently explored by the University of Missouri (MO) and University of Kansas (KS) in the United states. They found that reducing the photosynthetic active radiation (PAR) in a waterbody with 60.4 – 86.4% resulted in a 77.9% decline in cyanophyte biovolume in tanks dominated by cyanobacteria, which were predominantly affected by the limited light availability.

Additionally, these universities show the control of algal growth while keeping phosphate levels stable throughout the experiment.[2]

MPC-Buoy technology works through a similar principle; instead of limiting nutrients, it limits the availability of light to reduce the growth of cyanobacteria and other blooming algae. Other studies, such as the one performed by the University of Aarhus in Denmark, also showed that PAR declines exponentially over depth in both shallow water bodies and deeper waterbodies[3].

Therefore, instead of reducing light penetration into the top layer of the water surface, it is also possible to bring algal cells towards the water depth where levels of PAR are sufficiently reduced.

MPC-Buoy uses ultrasound as a mechanism to accomplish this. Ultrasound can be represented as an added hydrostatic pressure onto the algal cell, affecting the buoyancy of the cell. Algae require cell buoyancy in order to remain in the upper layer of the waterbody and obtain sufficient light to bloom.

Instead, the vertical migration of these algae is a more complex function where the lift provided by gas vesicles counteracts cell ballasts, such as carbohydrate and protein, which can be more accurately regulated based on the present water quality (turbidity, phosphate and nitrate concentrations) [4], as well as hydrodynamic variations such as hydrostatic pressure, waterflow and mixing of the surface column.

This is the area in which the ultrasound plays a key role, as the ultrasonic waves form a continuous pressure cycle around the algal cells, affecting the buoyancy regulation, which does not allow them to obtain sufficient buoyancy to remain the area where PAR is high enough for them to bloom.

This also explains the requirement for frequent variations in ultrasonic parameters such as amplitude, frequency, and waveform, as buoyancy regulation is a continuous process of algae closely related to their photosynthetic activities. It is therefore also important that the hydrostatic pressures around the algae continuously change.

This theory was tested in 2014, by Dr. Orren D. Schneider and Lauren A. Weinrich. They performed in-situ tests with 4 MPC-Buoy systems in a drinking water reservoir in New Jersey for a period of 5 months.

Water samples where taken throughout the entire test period and algal species where determined. They found during the initial part of the study, algae were controlled well by the MPC-Buoys. However, on August 13, an inlet from an untreated reservoir was opened because additional water was needed at the plant. This algae-laden water entered Reservoir 1 and seeded the reservoir with Aphanizomenon, a filamentous cyanobacterium.

Almost immediately, increased levels of algae, organic carbon and taste -and odour molecules where detected at the plant intake. Aphanizomenon started blooming in the reservoir until the ultrasonic program was changed matching this algal species. [5]

Why control algae if nutrients are the problem?

Algal blooms are often caused by eutrophication, a process where nitrogen and phosphorous content in a waterbody increases towards a point that algae and plants start growing excessively. Once algae start blooming, it will lead to increased turbidity, chlorophyll a, pH and phycocyanin. These parameters have a negative effect on the growth-rate of submerged macrophytes and other aquatic organisms.

Submerged macrophytes play a key role in the clarity of the water within an ecosystem; first because they consume nutrients that would otherwise be available for algal growth, and also because submerged aquatic plants provide shelter for zooplankton against fish.

Zooplankton are natural phytoplankton grazers, hence when zooplankton disappears, water can lose its clarity due to excessive phytoplankton growth. Another important effect of reduced plant growth and water quality is on levels of Dissolved Oxygen (DO) within a waterbody, which can become unstable and the deepest water levels (hypolimnion) can become anoxic (lack of oxygen). Thus, also the microbial aerobic digestion in the deeper water layers of nutrients become compromised.

The blooming of algae in a waterbody affects the entire production chain in the water. Anoxic conditions in the hypolimnion will lead to a reduced organic decomposition, meaning that the sediment layer in a waterbody will continue to grow and under lack of oxygen, may release its content (nutrients, metals) into the water column, often leading to a further increase in algal proliferation.

Under these conditions, reducing nutrient inflow into the waterbody will not alter any of the water quality parameters mentioned before. On the contrary, the sediment will continue to release the nutrients as long as algae are blooming, and the water quality will further deteriorate.

Therefore, to actively solve the problem around algal blooms, it is important that algal proliferation is first controlled so the water quality can stabilize allowing the aquatic ecosystem to adjust.

Cavitation is used in a wide variety of industrial processes, such as cleaning of jewellery, sterilisation of surgical equipment, homogenisation of (cell) samples and lysing of cells for laboratory applications.

Cavitation is often characterised by using high frequencies into the range of mHz. However, although the forms and characteristics of the cavitation may differ, it can be generated both at low (kHz) and high (mHz) frequencies but primarily depends on output power.

Lowe & L. Brand [6] reflect in their paper on the energy requirement to generate cavitation in water, and Joyce et al. (2010)[7] cited cavitation as a primary cause of algae control within their experiment (power per volume range of 0.0015–0.17W/cm3).

It is therefore assumed that any study with a power per volume range greater than this is utilising cavitation; however, it is good to keep in mind that other factors within an experiment also contribute to the generation of cavitation. Ultrasound utilized by the products manufactured by LG Sonic, generally use power volumes of 0.55*E-8 and 0.33*E-6 respectively, which is well under the threshold of generating cavitation.

As far as LG Sonic is concerned, these applications would damage non-target organisms as well as algae, but could not be upscaled to a real environment, as it would require too much energy and consume ultrasonic transducers.

Effects of ultrasound on fish

The study was performed by connecting to identical basins stocked with fish through a tunnel where the fish where able to migrate from one basin to the other. De Lange used fish migration, as well as the size of the fish, as parameters to indicate stress or other effects of the ultrasonic systems.

The fish population was sampled before ultrasound was activated, after one month and after 4 months. Results showed that the fish population was evenly distributed across the two basins even after 4 months of ultrasound operation, revealing that ultrasound has no effect on fish migration between the two basins. The length of the fish between basins did not show any significant differences either.

De Lange also did not find any increased fish mortality in the experiment; therefore, it was concluded that the ultrasonic system was not noticeable or considered unsafe for the tested fish species.[8]

Griessler Bulc et al. (2011) studied a water treatment system for common carp (Cyprinus carpio) which included ultrasound. They used equipment produced by LG Sonic for their tests, which was performed in 2 fishponds: one with the ultrasonic unit and the other without. They concluded that with treatment (including ultrasound), rearing conditions for common carp were better with higher body weight increase and higher fish production than in the pond without treatment. [9]

Krivograd Klemenčič & Griessler Bulc performed more tests on aquaculture with ultrasonic systems in 2013 [10] and 2015 [11], both on lab scale and in a fishpond. Both tests did not show any adverse effects on the fish, while the study inside the fishpond did show higher fish yield compared to the untreated pond.

Techer et al. studied the effects of ultrasonic irradiation on fish in 2017 using a commercially available low-power ultrasonic generator. Their study focused on long-term effects on the common carp (Cyprinus carpio), using 2-year-old carp that were exposed to low power ultrasound for 30-days. These results showed that carp were unaffected by ultrasound exposure when exposed in floating cages in fishponds over a 30-day period. [12]

Effects of ultrasound on zooplankton

The university of Ljubljana performed field and lab tests on Daphnia magna using equipment manufactured by LG Sonic. In the lab-scale tests, a set of adult and juvenile Daphnia magna where exposed to ultrasound and mobility was tested after 0, 4 and 19 hours of exposure.

In both tests, no significant differences were found in the mobility of the species after 19 hours, indicating that there was no acute effect of ultrasound exposure on the tested organisms.

In 2017, the aquatic research and consultancy Ecofide studied the effects of the MPC-Buoy systems, produced by LG Sonic. This study was commissioned by the Zoetermeer municipality and Rijnland Water Board to research the effects of the used ultrasonic technology on zooplankton.

For this study, lab-bread zooplankton were introduced in cages for a period of 7 days. After 7 days, the number of surviving water fleas and the number of produced young were counted. This testing method is and has been applied often to field research regarding the effects on zooplankton.

For example, the Delfland Water Board has been using this method for years to study the effects of pesticides (for example see Ecofide overview report 2008), as well as in the current Waternet research (Simoni, part of Ecological Key Factor toxicity); these field experiments form an important part (van der Oost et al., 2017; Stowa, 2016).

No negative effects caused by ultrasonic sound have been found regarding the survival of water fleas and the average survival rate over all samples has been 95-100%. [14]

[11] Krivograd Klemenčič A., Griessler Bulc T. 2015. The use of vertical constructed wetland and ultrasound in aquaponic systems. Environmental science and pollution research international, 22(2), 1420-1430

[13] Krivograd Klemenčič, Griessler Bulc, Pflieger. 2018. The effects of the LG Sonic technology on toxin degradation and on the environment (without algae). UNIVERSITY OF LJUBLJANA.

No comments were found for Ultrasound for algal bloom control: background, research and effects. Be the first to comment!