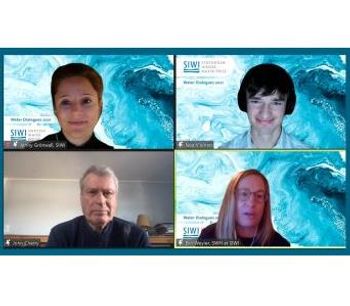 We have all been students at some point. In fact, we are still all students. The study of natural phenomena is not complete, and the study of human societies and how we govern Earth’s resources is more important than ever.

SIWI’s new webinar series Water Dialogues reminds us of why this is so important. In the first episode, on 11 January, Stockholm Water Prize laureate John Cherry discussed the threats to our groundwater together with Noa Vikman, Stockholm Junior Water Prize finalist 2018.

In the Water Dialogues, hosted by the Swedish Water House at SIWI, different Stockholm Water Prize laureates are paired with Stockholm Junior Water Prize national winners, to discuss a research topic in which they both have an interest and reflect on the path forward. The audience is invited to learn more about a water – especially on topics that tend to get less attention than they deserve.

One such example is groundwater, the topic of the first Water Dialogue on 11 January. It is not only non-existent to most of the public, water professionals in general tend to think about water availability only in terms of the surface water, maybe adding soil moisture and water vapour. Groundwater is our common blind spot. Water quality is mostly addressed in terms of industrial wastewater; what is underground is seldom measured and, for the most part, hidden.

Dr John Cherry has dedicated his scientific life and role as an educator to raising awareness of the importance of groundwater. By chance, he early in his career as a hydrogeologist met a student who had interned at the local nuclear plant and become aware of contamination from the radioactive waste. She convinced him this should be his niche. The rest is history. John Cherry established a new academic field, contaminant hydrogeology, which revolutionized the understanding of groundwater pollution.

Currently, John Cherry is dedicating much of his time to the “Groundwater project”, launched in 2020. The ambitious aim of the project is to make groundwater knowledge accessible to everyone, for free. Leading groundwater experts are contributing their work with the aim of having everything related to groundwater accessible in one place. It will also be translated to several languages.

During the Water Dialogues, John Cherry emphasized that even if “our relationship with groundwater is a total mess”, most groundwater is still safe to drink, but there is an urgent need to change our relationship with groundwater. He also pointed to the growing problem of chemical contamination as we are using more and more complex compounds. Today, most aquifers are contaminated by chemicals released from human activities, in addition to the naturally occurring contaminants such as arsenic and fluoride. This is a looming and underacknowledged health hazard, and John Cherry concluded by reminding us of the message that “if you are not part of the solution, you are part of the problem”. Solution measures include increased monitoring, education and a circular economy that will reduce the level of pollution from human activity.

Noa Vikman, still in his undergraduate studies at KTH Royal Institute of Technology, has received attention for his highly qualified research on Gold Nanoparticles: A Potential Colorimetric Sensor of Arsenic in Groundwater. The audience at the webinar got to learn more about the arsenic contamination that is detrimental to so many people’s health. Globally it affects at least over a 100 million people. It is for example estimated that in Bangladesh, one of the hardest hit areas, between 20 and 60 million people are affected, though large-scale screening is still needed. Noa Vikman’s high school project developed a novel colorimetric arsenic sensor, which could be useful to detect arsenic in water in a cost-effective manner, he explains.

In the discussion, moderated by SIWI’s groundwater governance expert Dr. Jenny Grönwall, the conversation turned to how people absorb information and knowledge and how we can make science available to those who need it the most.

Jenny Grönwall stressed the importance of groundwater quality for human health, food security and other human needs, but also to sustain healthy ecosystems. This is acknowledged in the Sustainability Development Goal 6.1 as well as in the human right to safe drinking water. She also noted that millions of households around the world have to self-supply from wells and boreholes because they are not being adequality served by utilities. And as water services for the household is a gendered task, information to women and girls (who sometimes are deprived of adequate education) will be important to avoid contaminated water sources.

Listen to the full conversation here, with presentations and a Q&A!

No comments were found for Water Dialogues - What’s underground? Undervalued Groundwater. Be the first to comment!