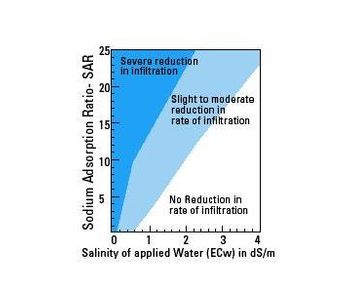 Water penetration problems effect one out of every five acres in California (about 20 percent of the farm land) and it’s estimated that this costs growers $20 to $1,200 per acre. This problem is definitely worth taking a close look at since its quiet common in the central San Joaquin Valley.

A more appropriate term to describe water entering the soil at the surface is infiltration. Penetration is a term better used to describe the movement of water through the subsurface layers of the soil, once it has infiltrated the surface. An infiltration problem occurs if the irrigation water does not enter the soil rapidly enough, during a normal irrigation cycle, to replenish the soil with water needed by the crop before the next irrigation.

Reduced infiltration rates, if due to quality of applied water, are generally a problem within the top inch of the soil. The end result is a decrease in the water supplied to the crop's root zone. This is similar to a yield reduction due to salinity but for a different reason. A water infiltration problem reduces the quantity of water put into the soil for later use by the crop, while salinity reduces the availability of the water in storage.

The key elements from a chemical analysis of an irrigation water which govern the water's infiltration characteristics are the total salinity of the water (ECw), and the relative sodium content. The relative sodium content is evaluated through a calculated value called the Sodium Adsorption Ratio (SAR). The SAR is calculated from the elemental levels of calcium (Ca), magnesium (Mg), and sodium (Na) in the water.

If we know the salinity, ECw, and the SAR we can use a simple graph to predict the rate of infiltration. The infiltration rate generally increases when the water is saltier and decreases with higher SAR values. Also, when the salt content of a water source is very low (less than 0.5 dS/m) we can have problems with infiltration no matter what value we have for the SAR.

It is difficult to make generalized statements about the chemical characteristics of well waters based on their location in the Central Valley. However, based on our experiences in assessing water chemistries during the last 15 years, we can draw some general conclusions. Most 'good' quality wells in the middle and east side of the valley have an ECw between 0.4 and 0.8 dS/m and SAR's of 2 to 4. Water from these wells typically has a slight to moderate rate of infiltration into soils and periodically require a soil amendment to maintain adequate water infiltration.

As we move from the middle of the valley westward, the well waters have a higher total salt content and are much more varied in their SAR values. Some of these wells are well balanced with salinity and SAR values which provide very good infiltration rates. Other well waters to the west have high SAR’s in relation to their salinity and require amendments to be added to the water or applied to the soil to achieve ad-equate water infiltration.

Most of the surface waters delivered to the east side of the valley through irrigation districts have a very low salinity with ECw values ranging from 0.05 to 0.20 dS/m. These surface waters have their own unique problems with infiltration because they are so pure and periodic applications of soil amendments are needed.

Soil amendments which can be used to enhance water infiltration include gypsum, soil sulfur and sulfuric acid. Gyp sum is the most universal amendment while soil sulfur and sulfuric acid require that the soil contain free lime for them to work. From a soil analysis, growers can determine if their soil contains enough free lime for the acid forming amendments. Water amendments also include gypsum and sulfuric acid as well as other soil penetrant type materials which can act as temporary solutions to infiltration problems. These materials are added to the irrigation water before it’s applied to the field.

No comments were found for Water penetration problems. Be the first to comment!