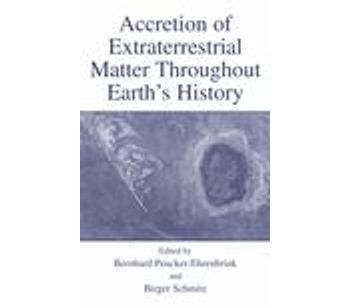 0
Share Share with Facebook Share with Tweeter Share with LinkedIn
Jan. 1, 1900
Every year Earth is bombarded with about 40,000 tons of extraterrestrial material. This includes microscopic cosmic dust particles shed by comets and asteroids in outer space, meteorites, as well as large comets and asteroids that have led to catastrophic events in the geologic past. Originally considered only a curiosity, extraterrestrial matter found on Earth provides the only samples we have from comets, asteroids and other planets. Only recently mankind has started to actively collect extraterrestrial matter in space (Apollo program, Stardust mission) rather than to wait for its delivery to Earth. Still, most of our knowledge of the origin and evolution of our solar system is based on careful studies of meteorites, cosmic dust, and traces of large impact events in the geologic record such as the mass extinction that terminated the Cretaceous Period and led to the extinction of the dinosaurs. This book summarizes our current knowledge of the properties, origin, orbital evolution and accretion mechanism of extraterrestrial matter accreted on Earth and sheds light on accretion processes and fluxes in the geologic past. The chapters in the first part of the book are arranged in order to follow extraterrestrial matter from its origin in space, its orbital evolution on its way to Earth, its interaction with the Earth magnetosphere and atmosphere to its more or less violent collision with the Earth's surface. In the second part of the book several chapters deal with the present?day flux of cosmic dust and meteorites to Earth. Finally, several chapters deal with the reconstruction of the accretion history of extraterrestrial matter on Earth, starting with the most recent geologic past and ending with the very early, violent accretion period shortly after the formation of Earth, Moon and other solid planets in our solar system.

No comments were found for Accretion of Extraterrestrial Matter Throughout Earth´s History. Be the first to comment!