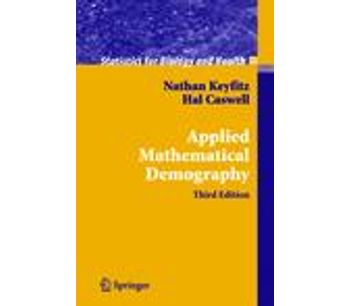 0
Share Share with Facebook Share with Tweeter Share with LinkedIn
Jan. 1, 1900
The third edition of this classic text maintains its focus on applications of demographic models, while extending its scope to matrix models for stage-classified populations. The authors first introduce the life table to describe age-specific mortality, and then use it to develop theory for stable populations and the rate of population increase. This theory is then revisited in the context of matrix models, for stage-classified as well as age-classified populations. Reproductive value and the stable equivalent population are introduced in both contexts, and Markov chain methods are presented to describe the movement of individuals through the life cycle. Applications of mathematical demography to population projection and forecasting, kinship, microdemography, heterogeneity, and multi-state models are considered. The new edition maintains and extends the book's focus on the consequences of changes in the vital rates. Methods are presented for calculating the sensitivity and elasticity of population growth rate, life expectancy, stable stage distribution, and reproductive value, and for applying those results in comparative studies. Stage-classified models are important in both human demography and population ecology, and this edition features examples from both human and non-human populations. In short, this third edition enlarges considerably the scope and power of demography. It will be an essential resource for students and researchers in demography and in animal and plant population ecology. Nathan Keyfitz is Professor Emeritus of Sociology at Harvard University. After holding positions at Canada's Dominion Bureau of Statistics, the University of Chicago, and the University of California at Berkeley, he became Andelot Professor of Sociology and Demography at Harvard in 1972. After retiring from Harvard, he became Director of the Population Program at the International Institute for Applied Systems Analysis (IIASA) in Vienna from 1983 to 1993. Keyfitz is a...

No comments were found for Applied Mathematical Demography. Be the first to comment!