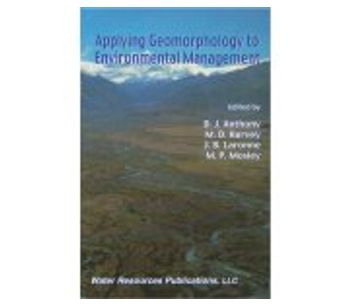 This book is the outcome of a symposium held to honor Dr. Stanley Schumm, University Distinguished Professor at Colorado State University and a pioneer in the field of fluvial geomorphology. In this volume, former graduate students and colleges of Dr. Schumm apply his groundbreaking ideas, such as those of complex response and geomorphic thresholds to a variety of problems. Included in this work are papers that address primary fluvial processes, extreme events, anthropogenic effects on fluvial systems, applied fluvial geomorphology, and engineering geomorphology.

In each section, different authors display the many ways that Dr. Schumm’s ideas have been applied– from the purely theoretical (how do sediment particles move on the bed of a stream, and how do they create bedforms?) to the eminently practical (how does one redesign and rebuild a severely impacted river channel, or how to determine appropriate habitat for endangered fishes?). Each section of this tribute volume to Dr. Schumm displays the seeds of his original ideas and later work – covering a now 45-year career (and still going!). His former graduate students have used both his techniques and his theoretical concepts to expand the field of fluvial geomorphology, often in surprising ways.

The first section on primary fluvial processes deals withthe dynamics of braided and meandering channels in a variety of geomorphic terraines – from extreme hot desert to periglacial Alaska, with a small rainfall-erosional facility thrown in for good measure. The section on extreme events deals with earthquakes and floods, their effects on fluvial systems, and using fluvial geomorphology to determine paleoseismicity.

Several authors address anthropogenic effects on fluvial systems.This vital section deals with flow augmentation, pollution, and channel incision; all important issues for those interested in disturbed fluvial channels and channel mitigation. Some anthropogenic effects are also noted in the section on applied fluvial geomorphology. This section addresses fluvial systems impacted by sediment slugs and climate change, but also addresses the ways in which fluvial geomorphology can be used to assess habitat for endangered fish. The final section on engineering geomorphology covers design issues and channel response to dam building – a classic case of complex response.
This volume is an important addition to the bookshelves of those who are concerned with the workings and restoration of the world’s rivers. It contains papers not only on basic research on fluvial systems, but also addresses a variety of practical issues facing individuals who deal with sediment and chemical pollution, fish habitat, and severely impacted channels. Publ. 2001, WRP

No comments were found for Applying Geomorphology to Environmental Management. Be the first to comment!