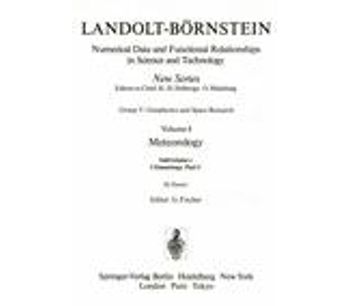 0
Share Share with Facebook Share with Tweeter Share with LinkedIn
Jan. 1, 1900
Volume V/4 of the New Series covers the field of meteorology as the physics of the atmosphere in several subvolumes. The first, V/4a 'Thermodynamical and dynamical structures of the global atmosphere', appeared in 1986. It was followed by subvolume V/4b dealing with the physical and chemical data of the atmosphere. Subvolume V/4c, which appears in two parts, is concerned with the physical and meteorological aspects of climate. During the last decade, questions related to climate have met with an increased interest, since anthropogenic climate modifications on time-scales of 100 years are now considered conceivable. The first part of this subvolume, i.e. V/4c1 (1987) contains contributions on climate definition, specific surfaces climates, climate variations, and the planetary boundary layer. The second part, V/4c2, presented here, consists of two chapters: 'Climate modeling' and 'The present global surface climate'. The contribution on 'Climate modeling' attempts to explain the structure and physical basis of mathematical models which nowadays play a leading role in the discussion of climate, since they appear most appropriate to improve our understanding of the mechanisms of climate and to forecast possible changes. The chapter 'The present global surface climate' contains a representative selection of observed climate elements and phenomena near the ground.

No comments were found for Climatology. Be the first to comment!