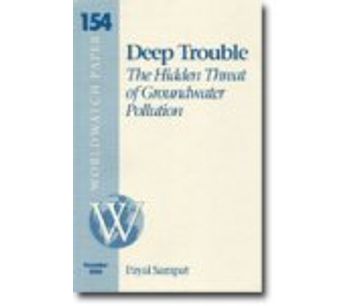 A Global Sampler of Groundwater Pollution

India's Central Pollution Control Board surveyed 22 major industrial zones in the late-1990s and found that groundwater in every one of them was unfit for drinking. (p. 32)

In the northern Chinese provinces of Beijing, Tianjin, Hebei, and Shandong, nitrate concentrations in groundwater exceeded the health guideline in more than half of the locations studied in 1995. (p. 19)

In Mexico's Yucat?n Peninsula, more than half of groundwater sampled contained nitrate at levels above the safe limit. (p. 20)

In Romania and Moldova, more than 35 percent of the sites sampled in the mid-1990s had nitrate concentrations higher than the health guideline. (pp. 19-20)

Researchers in the Netherlands found that 28 percent of groundwater used for drinking contained perchlorate, a solvent used widely in dry cleaning, at levels greater than 10 micrograms per liter. (p. 32)

A survey of 15 Japanese cities found that 30 percent of all groundwater supplies contained varying levels of chlorinated solvents, although just 3 percent were above prescribed limits. (p. 32)

In Manila, where groundwater levels have fallen 50-80 meters because of overdraft, seawater has flowed 5 kilometers inland, contaminating the city's aquifer with salt. Just 2 percent of seawater mixed with freshwater makes the water unusable for drinking or irrigation. In Bangkok, Thailand, many wells have been abandoned because of saltwater intrusion. (p. 35)

No comments were found for Deep Trouble: The Hidden Threat of Groundwater Pollution. Be the first to comment!