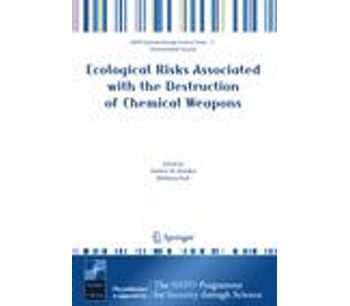 Ecological Risks Associated with the Destruction of Chemical Weapons

0
Share Share with Facebook Share with Tweeter Share with LinkedIn
Jan. 1, 1900
The Convention on the Prohibition of the Development, Production, Stockpiling and Use of Chemical Weapons and their Destruction provides for the elimination of chemical weapons arsenals amassed during the Cold War. The easier-said-than-done task of removing these deadly weapons, however, poses huge environmental problems. This book is the compendium of the workshop on the 'Ecological Risks Associated with the Destruction of Chemical Weapons', hosted by the University of Lüneburg in October 2003, which brought the former enemies NATO and Russia together to discuss, reflect on, and exchange their experiences in the laudable mission of environmentally friendly disposal of chemical weapons. This four-day workshop received contributions from 57 experts from North America, Russia, and European countries. Most of them are recognized authorities in the field of chemical weapons disposal as well as in related fields. The speeches by those who share the burden of this terrible undertaking concentrated on cleaning up contaminated sites, the ethics, political and international law aspects of the destruction of chemical weapons, and on issues related to human health, pathogenesis, toxicity, and exposure to the polluted environment. Contributions were also made on lewisite detection, risk prevention, insurance, safety, monitoring of old chemical weapons destruction as well as public awareness for this problem.

No comments were found for Ecological Risks Associated with the Destruction of Chemical Weapons. Be the first to comment!