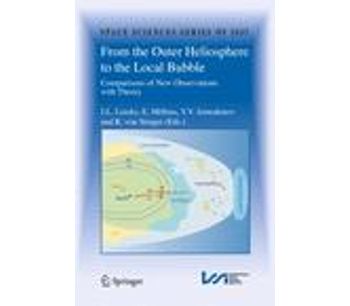 From the Outer Heliosphere to the Local Bubble

0
Share Share with Facebook Share with Tweeter Share with LinkedIn
Jan. 1, 1900
Knowledge about the outer heliosphere and the interstellar medium, which were long treated as two separate fields, has improved dramatically over the past 25 years as a consequence of recent developments: The discovery of interstellar pickup ions and neutral helium inside the heliosphere, the determination of the interstellar hydrogen distribution in the heliosphere obtained using backscattered solar Lyman-alpha radiation, the prediction and subsequent detection of the hydrogen wall just outside of the heliopause, the development of detailed global models for the interaction of solar wind plasma with the interstellar medium, and most recently, direct in-situ plasma and field measurements inside of the heliosheath. At the same time, our understanding of the nearby galactic environment, including the composition and dynamics of the warm gas clouds and hot gas in the local bubble, has benefited greatly from absorption-line spectroscopy using nearby stars as background sources and dynamic modeling. The present volume provides a synopsis of these developments organised into seven sections: Dominant physical processes in the termination shock and heliosheath, three-dimensional shape and structure of the dynamic heliosphere, relation of the plasmas and dust inside and outside of the heliosphere, origin and properties of the very local interstellar medium, energy and pressure equilibria in the local bubble, physical processes in the multiphase interstellar medium inside of the local bubble, and the roles that magnetic fields play in the outer heliosphere and the local bubble. The last theme is probably the most basic of all as magnetic fields play important roles in most of the phenomena discussed here. The volume concludes with four papers providing the 'big picture' by looking at the time evolution of both the heliosphere and the local bubble, looking beyond the local bubble, and finally addressing the challenges in modeling the interface between the two media.

No comments were found for From the Outer Heliosphere to the Local Bubble. Be the first to comment!