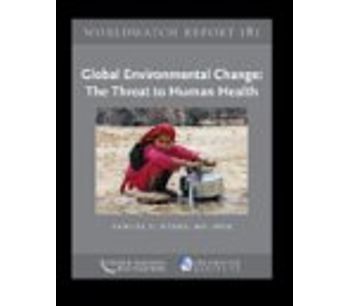 Over the past two-to-three hundred years, humanity’s ecological footprint has ballooned to such an extent that we are now fundamentally altering the planet. We have transformed the Earth’s land surface and altered the function of its ecosystems, and we are triggering the rapid loss of both terrestrial and marine life. We are also profoundly changing our planet’s climate. It is increasingly apparent that the breadth and depth of the changes we are wreaking on the environment are imperiling not only many of the other species with which we share the ecological stage, but the health and wellbeing of our own species as well.

Global climate change threatens human health in numerous and profound ways. Large segments of the population will experience more heat waves, altered exposure to infectious disease, and more-frequent natural disasters. Most significantly, climatic disruption threatens the adequacy of the core “building blocks” of health for large populations around the globe: sufficient food and nutrition, safe water for drinking and sanitation, fresh air to breathe, and secure homes to live in. As climate change dismantles these central elements of healthy societies, people with fewer resources will be forced to migrate in large numbers to lands where they may not be welcome. A likely result of all of these processes will be increased civic instability and strife.

Even if the global climate were stable, humans would still be converting more land, water, and ecosystem services for their own use. The environmental changes from these activities are combining to magnify several public health threats to the extent that they now endanger health and wellbeing globally and on scales never experienced in human history. These threats include: exposure to infectious disease, air pollution, water scarcity, food scarcity, natural disasters, and population displacement. Taken together, they represent the greatest public health challenge of the 21st century. We need to wake up to the danger and act with urgency to reduce ecological disruption as much as possible while simultaneously strengthening the resilience of populations to withstand the impacts of unavoidable environmental change.

But vulnerability is not determined only by a population’s exposure to health threats; it is also determined by the ability to adapt in the face of such threats. Many of the threats associated with global environmental change can be mitigated by means of trade, technology, infrastructure, behavior change, philanthropy, and governance. Populations with the resources—both economic and socio-cultural—to engage these mechanisms will suffer less than those without such resources. As a consequence, climate change threatens to further accentuate the divide between rich and poor, both across nations and within them.

Because the impacts will depend in large part on a population’s location and socioeconomic status, it is critical that all countries conduct rigorous, location-specific risk assessments to identify which populations are at highest risk for which threats. Governments and other stakeholders will also need to mobilize substantial financial resources, technical capacity (both in assessment and appropriate technologies), and new partnerships that can help build capacity over the long term.

The health impacts of climate change present an opportunity as well as a challenge. The international community increasingly recognizes the moral imperative to help the poor reduce their vulnerability to climate change—a threat that developing countries have had little role in generating. At the same time, there is renewed emphasis on achieving the United Nations’ Millennium Development Goals, as well as increasing attention in the United States to reforming foreign assistance. In this context, climate change may help to shine a light on some of the most entrenched challenges to human health in the poorest countries—including poverty, malnutrition, and infectious disease.

For many years, the industrialized world has done less than it could to relieve suffering among the global poor. Now, it will need to vigorously reframe its development assistance to address the impacts of climatic disruption—impacts for which it is largely responsible. With the upcoming climate talks in Copenhagen, Denmark, the year 2009 may be a defining moment in human history: a year in which the historical injustice of human-induced climate change could fuel an international effort to reduce vulnerability and simultaneously address some of the longest-standing scourges to human health.

Our challenge, for the rest of this century and beyond, will be to work to mitigate environmental change (for example, by reducing greenhouse gas emissions) and to increase the resilience of populations to the impacts of any changes that we are unable to mitigate (such as sea-level rise triggered by past emissions). Neither task should detract from the other; we must pursue both simultaneously and with equal fervor and strategic creativity. Along the way, there will be substantial opportunities to identify co-benefits, whereby a single intervention can both mitigate environmental threats and improve human health.

Addressing the health impacts of global environmental change needs to be a priority for the public health community, environmental scientists, and natural resource managers, as well as for governments and intergovernmental bodies such as the United Nations and multilateral development banks. What we need most are political will and financial resources. While these resources will need to be large, they are small compared to the cost of ignoring the impacts of large-scale change and trying to address the overwhelming problems of famine, epidemic disease, massive population displacement, and civil strife that may ensue.

No comments were found for Global Environmental Change: The Threat to Human Health. Be the first to comment!