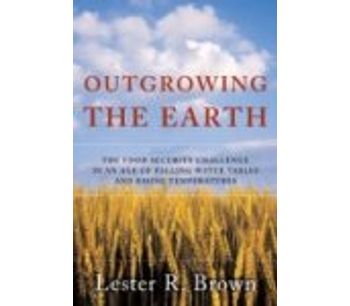 Outgrowing the Earth: The Food Security Challenge in an Age of Falling Water Tables and Rising Temperatures

In recent months, rising oil prices have focused the world’s attention on the depletion of oil reserves. But the depletion of underground water resources from overpumping is a far more serious issue. Excessive pumping for irrigation to satisfy food needs today almost guarantees a decline in food production tomorrow.

The growth in world population since 1950 exceeds that during the preceding 4 million years. Perhaps more striking, the world economy has expanded sixfold since 1950. As the economy grows, its demands are outgrowing the earth, exceeding many of the planet’s natural capacities to provide food, water, and the basic needs of daily living.

Two of the newer trends—falling water tables and rising temperatures—are making it far more difficult for the world’s farmers to adequately feed the 76 million people added to our numbers each year.

Brown notes in Outgrowing the Earth that humans drink nearly 4 quarts of water a day in one form or another, but the food we consume each day requires 2,000 quarts of water to produce, or 500 times as much. Agriculture is the most water-intensive sector of the economy: 70 percent of all water pumped from underground or diverted from rivers is used for irrigation. Twenty percent is used by industry and 10 percent goes to residences.

Of even more concern, the vast majority of the nearly 3 billion people to be added to world population by mid-century will come in countries where water tables are already falling and wells are going dry. Historically it was the supply of land that constrained the growth in food production, but today the shortage of water is the most formidable barrier.

Rising temperatures are the second big threat to future food security. During the last few years, crop ecologists focusing on the precise relationship between temperature and crop yields have found that each 1 degree Celsius rise in temperature during the growing season reduces the yield of grain—wheat, rice, and corn - by 10 percent.

Since 1970, the earth’s average temperature has risen nearly 0.7 degrees Celsius (1 degree Fahrenheit). The five warmest years during 124 years of recordkeeping began in 1880 occurred in the last seven years.

In 2002, record-high temperatures and drought lowered grain harvests in both India and the United States. These reduced harvests helped pull world grain production some 90 million tons below consumption, a shortfall of more than 4 percent.

In 2003, it was Europe that bore the brunt of rising temperatures. The record-breaking heat wave that claimed 35,000 lives in eight countries withered grain harvests in virtually every country from France in the west through the Ukraine in the east. The resulting reduction in Europe’s grain production of some 30 million tons was equal to half the U.S. wheat harvest.

Although climate change is now widely discussed, we are slow to grasp its full meaning for food security. Everyone knows that the earth' temperature is rising, but commodity analysts often condition their projections on weather returning to 'normal,' failing to realize that with climate now in flux there is no 'normal' to return to.

The Intergovernmental Panel on Climate Change, a group of some 2,000 eminent scientists, projects that the earth’s average temperature will rise during this century by 1.4-5.8 degrees Celsius (2-10 degrees Fahrenheit). Young farmers now on the land face the prospect of higher temperatures than any generation of farmers since agriculture began.

Higher temperatures in mountainous regions alter the precipitation mix, increasing rainfall and reducing snowfall. The result is more flooding during the rainy season and less snowmelt to feed rivers during the dry season. In Asia, for example, this shift is affecting the flow of the major rivers that originate in the vast Himalayan-Tibetan region, including the Indus, Ganges, Mekong, Yangtze, and Yellow.

The world has been slow to respond to these new threats to food security. In four of the last five years the world grain harvest has fallen short of consumption. As a result, world grain stocks are now at their lowest level in 30 years. Another large world grain shortfall in 2005 could drop stocks to the lowest level on record and send world food prices into uncharted territory of rising food prices.

Among the three grains that dominate the world food supply—wheat, rice, and corn - the supply of rice is likely to tighten first simply because it is the most water-dependent of the three grains. Finding enough water to expand rice production is not easy in a world with spreading water scarcity. If rice supplies tighten and prices rise, the higher prices will then likely spread to wheat, the other principal food grain.

Perhaps the biggest agricultural reversal in recent times has been the precipitous decline in China’s grain production by 50 million tons between 1998 and 2004. Since 1998 China has covered this decline by drawing down its once-massive stocks of grain. Now stocks are largely depleted and China is turning to the world market. Its purchase of 8 million tons of wheat to import in 2004 could signal the beginning of a shift from a world food economy dominated by surpluses to one dominated by scarcity.

Overnight, China has become the world’s largest wheat importer. Yet it will almost certainly import even more wheat in the future, not to mention vast quantities of rice and corn. It is this potential need to import 30, 40, or 50 million tons of grain annually within the next few years and the associated emergence of a politics of food scarcity that is likely to put food security on the front pages of newspapers.

At the other end of the spectrum is Brazil, the only country with the potential to expand world cropland area markedly. But what will the environmental consequences be of continuing to clear and plow Brazil’s vast interior? Will the soils sustain cultivation over the longer term? And how many plant and animal species will Brazil sacrifice to expand its exports of soybeans?

World food security is a far more complex issue today than it was a generation ago. In earlier times, if world grain supplies tightened, the United States simply returned some of its idled cropland to production, quickly expanding the harvest and reestablishing price stability. That commodity set-aside program was phased out in 1995, depriving the world of this ready reserve of cropland that could be quickly brought into production.

Fortunately we now have the technologies to do this. For example, if the United States over the next decade were to shift its whole automobile fleet to highly efficient gas-electric hybrid engines with efficiencies comparable to today’s Toyota Prius, the country could easily cut gasoline use in half.

On the supply side, the potential for cutting coal use and carbon emissions by developing wind resources to generate electricity has enormous potential. In Europe, which is leading the world into the wind era, and where coal mines are closing, some 40 million Europeans now get their residential electricity from wind farms. By 2020, half of Europe's 400 million people are projected to get their residential electricity from wind.

These are but two of the hundreds of steps that can be taken worldwide to cut carbon emissions and stabilize climate. Ironically, given the role of automobiles in raising the atmospheric carbon dioxide levels that drive climate change, the fuel efficiency of the vehicle we drive to the supermarket may affect the price of the foodstuffs inside the supermarket.

Many Americans see terrorism as the principal threat to security, but for much of humanity, the effect of water shortages and rising temperatures on food security are far more important issues. For the 3 billion people who live on 2 dollars a day or less and who spend up to 70 percent of their income on food, even a modest rise in food prices can quickly become life-threatening. For them, it is the next meal that is the overriding concern.

No comments were found for Outgrowing the Earth: The Food Security Challenge in an Age of Falling Water Tables and Rising Temperatures. Be the first to comment!