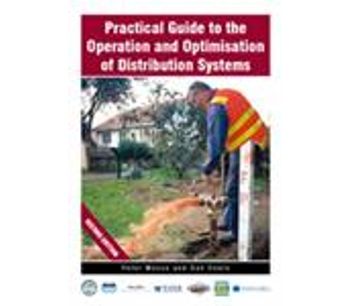 Practical Guide to the Operation and Optimisation of Distribution Systems

Share Share with Facebook Share with Tweeter Share with LinkedIn
Jul. 1, 2009
Practical Guide to the Operation and Optimisation of Distribution Systems has been written to assist operators perform their jobs effectively and to help operators understand the vital roles they fulfil within the water industry. The guides are not about identifying costly solutions but simply identifying ways to get the best out of what is available at any particular time. The aim is to provide suggestions and hints that can be implemented easily, cheaply and immediately in the field.

UPDATED with over 135 pages of inforamtion

The distribution system represents the final step in the delivery of water from the catchment to the consumer.

The system consist of extensive networks of interconnected pipes, valves, tanks and storages, most of it underground. The networks typically form the largest component of the water supply system, both in terms of size and asset value.

Water quality generally deteriorates as it passes through the distribution system. Distribution systems were historically designed primarily for security of supply rather than quality. Pipes and storages tend to be oversized to allow for future growth and development. As a result, detention times are often too long and flows too low to ensure good water quality. Active chemical and biological processes occur during the passage of water through the pipes, leading to changes in the nature of the water. These changes include the growth of biofilms and the release of chemical contaminants from the biofilms and from the pipe materials themselves. Breaches, intentional or accidental, and backflow, allow the introduction of pathogens and contaminant chemicals further compromising the quality of the water. The most commonly reported problems in distribution systems are of an aesthetic nature such as taste and odour complaints, however there is considerable potential for contamination events to lead to serious health issues.