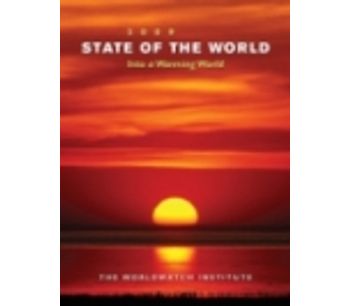 State of the World 2009: Into a Warming World

What must we do in the 21st century—especially in 2009 and the years just following—to head off the kind of climate catastrophe that many scientists now see as likely?

State of the World 2009 is intended to inject new inspiration and energy into national and international climate negotiations by conveying the profound, long-term consequences of the experiment we are now conducting on the Earth's atmosphere, with an emphasis on the human and ecological effects of that transformation.

It`s New Year`s Day, 2101. Somehow, humanity survived the worst of global warming—the higher temperatures and sea levels and the more intense droughts and storms—and succeeded in stabilizing the Earth`s climate. Greenhouse gas concentrations are peaking and are expected to drift downward in the 22nd century. The rise in global temperatures is slowing and the natural world is gradually healing. The social contract largely held. And humanity as a whole is better fed, healthier, and more prosperous today than it was a century ago.

This scenario of an imagined future raises a key question: What must we do in the 21st century—especially in 2009 and the years just following—to make such a future possible, and to head off the kind of climate catastrophe that many scientists now see as likely? This question inspires the theme of the Worldwatch Institute`s State of the World 2009 report: how climate change will play out over the coming century, and what steps we most urgently need to take now.

The year 2009 is pivotal for the Earth`s climate. Scientists have warned that we have only a few years to reverse the rise in greenhouse gas emissions and help avoid abrupt and catastrophic climate change. The world community has agreed to negotiate a new climate agreement in Copenhagen in December 2009. And early in the year, Barack Obama was sworn in as the 44th U.S. President. The United States, one of the world`s largest producers of greenhouse gases, now has its best chance to provide global leadership by passing national climate legislation and constructively engaging with the international community to forge a new consensus on halting emissions.

State of the World 2009 is intended to inject new inspiration and energy into national and international climate negotiations by conveying the profound, long-term consequences of the experiment we are now conducting on the Earth`s atmosphere, with an emphasis on the human and ecological effects of that transformation. The book also examines the policy changes needed to combat climate change and explores the economic benefits that could flow from the transition, including the potential to create new industries and jobs in rich and poor countries alike.

The 26th edition of the flagship series, State of the World 2009 goes beyond the incremental half-measures that mark climate policy debates in too many capitals. It makes the case that it is only by understanding the unique scale and vast time horizon of the climate problem that the needed political will can be mustered. And because solving the climate problem will have such significant benefits for human welfare, it may turn out that big solutions will be easier to adopt than the policy baby steps that have proven so difficult during the past two decades.

The questions addressed in State of the World 2009 are many: how do we adapt-not just as communities and nations, but as a species-to the warming that is headed our way, no matter what we do now? How will the world deal with the fact that the climate burden will fall heaviest on countries whose contributions to climate change have been the most modest? And even as we struggle to adapt, how does society maintain focus on slashing emissions to a pale shadow of their current levels?

Meanwhile, the drive to advance living standards will continue, and the world population will continue growing at least for some decades and perhaps for the rest of the century. What new technologies, behaviors, institutions and agreements, and even ways of governing will emerge from this challenge? Most critically, how will the poor fare in face of the greatest threat to economic development the world has ever seen? With the right approach, could we actually end up with more rather than less prosperity and well-being as a result?

State of the World 2009 draws from the research expertise of the Worldwatch Institute and from outside scientists and policy experts, with chapters devoted to the technological and institutional developments most likely to help humanity weather the storm of global warming. For this historic volume, Worldwatch has recruited an exceptional team of innovative thinkers and inspiring writers from rich and poor countries alike. R.K. Pachuari, Chair of the Intergovernmental Panel on Climate Change, authored the foreword, and leading climate change researchers and activists from around the world contributed their talents to this volume.

State of the World 2009 examines: the next-generation technologies that show the most promise for eliminating greenhouse gas emissions or removing these gases from the atmosphere; enforceable agreements that reward countries and individuals for cutting emissions; innovative strategies for building climate-change resilience in the poorest countries; and ideas for making sure the natural world survives the changes on the way. In addition to six chapters, it includes 22 `climate connections` on topics from climate and biodiversity to Chinese and Indian perspectives on the crisis. It also includes a convenient climate change reference guide and glossary.

State of the World 2009 is far more than a book. It is part of a two-year campaign to mobilize the world to combat climate change, focusing special attention on the Copenhagen climate agreement and working closely with Worldwatch`s partners around the globe—particularly the key countries of China, India, and the United States. Target constituencies include legislators, business and finance leaders, the media, the development community, and the young people whose lives will be most affected by climate change. We plan to integrate the existing Worldwatch Web site with State of the World 2009 to create an online platform that will present more ideas than the book alone can carry. And we will encourage an active, ongoing dialogue about climate solutions that involves everyone from prime ministers and CEOs to citizens concerned about their children`s futures.

About the State of the World Series

Worldwatch`s flagship publication, State of the World, has educated a broad audience of students, journalists, policymakers, and concerned citizens about trends in sustainable development for a quarter century. The book has been published in 36 languages, and over the years it has authoritatively assessed issues ranging from population, energy, and agriculture to materials use, health, and trade policy. Topics are covered from a global perspective, with an emphasis on innovation and problem-solving. State of the World is recognized as a classic of environmental literature, having attracted luminaries from Kofi Annan to Mikhail Gorbachev to write forewords for the book. News media, policymakers, and NGOs worldwide cite the book for its cutting-edge analysis, reliability, and careful documentation of its arguments, all marshaled to speed the global transition to a sustainable world.

No comments were found for State of the World 2009: Into a Warming World. Be the first to comment!