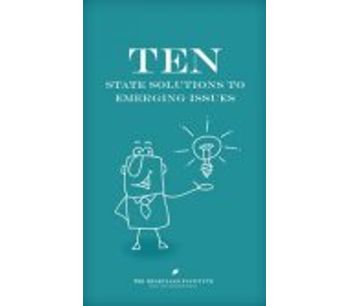 This booklet explores solutions to the top public policy issues facing the states in 2016 and beyond in the areas of budget and tax, education, energy and environment, health care, and constitutional reform. The solutions we have identified are proven reform ideas gaining momentum among the states and with legislators.

Budget and Tax Solutions. Oklahoma and Utah have addressed pension reform in a sustainable way, at a time when most state pension systems across the country are diverting money away from essential government services and creating pressure for tax increases. Arizona, Kansas, and Missouri, among other states, have implemented welfare reforms that aim to move people from government dependency to self-sufficiency.

Education Reform Solutions. Students in the United States perform poorly compared to their counterparts in other countries, even though per-pupil spending here is far higher. Many states have responded by expanding school choice through increased access to charter schools, vouchers, education savings accounts (ESAs), parent trigger programs, and tax credits. Nevada’s new ESA program, for example, may serve as a model for other states. In addition, some states are fighting back against Common Core State Standards and its testing mandates.

Energy and Environment Solutions. The debate over environmental protection has changed as energy production in the United States has increased due to hydraulic fracturing (aka fracking) and horizontal drilling techniques and concern over global warming (aka climate change) has diminished. Kansas, North Carolina, Ohio, and West Virginia have taken steps to roll back their renewable energy portfolio mandates. States also are warming up to the safety and benefits of fracking and are beginning to recognize how unnecessary and ineffectual many climate change regulations have been.

Health Care Solutions. Indiana and Pennsylvania, among other states, are considering reform of their certificate of need laws, which restrict competition among health care providers and drive up costs. Twenty-four states have opted not to expand Medicaid under the Affordable Care Act, seeking instead to fix some of the problems with that program.

Constitutional Solution. State elected officials are increasingly concerned by the national government’s lack of fiscal discipline. Many are considering the use of Article V of the U.S. Constitution to restore the role of the states and end the practice of burdening future generations with ever-greater government debt. Six states passed seven Article V resolutions or bills in 2015, and all 50 states either saw bills introduced or recently adopted Article V resolutions.

No comments were found for Ten State Solutions to Emerging Issues. Be the first to comment!