ADC BioScientific Ltd. have been designing, building and supplying infrared gas analysers for the measurement of CO2 gas exchange, since 1969. Our renowned, single channel infrared gas analysis (IRGA) technology is incorporated into devices used to measure the carbon cycle through the study of plant, soil and atmospheric gas exchange. Many ‘firsts’ for the global plant physiology market have come out of Research and Development at ADC. We developed the first battery portable photosynthesis system, enabling experiments to move from the greenhouse to the field, in the natural environment. We also developed the first photosynthesis system to have microclimate control, which enabled researchers to probe the photosynthetic process in greater depth.

We continue to lead the market with innovative, research-led analysers for plant, soil and atmospheric research. We are passionate about transforming carbon cycle research with portable, accurate and adaptable instruments.

We are committed to quality across our products and services and our worldwide representatives offer local, customer support. We listen and respond, forming close partnerships with research institutes and universities worldwide.

To design, manufacture and supply scientific devices that are:

Our Story
It was the summer of 1969 when four engineers: Messrs Moult, Sullivan, Doncaster and Coombes (from left to right in the photograph below) founded The Analytical Development Company Ltd. to manufacture infrared gas analysers in Leytonstone, London, UK. Within a year, they had expanded into a factory unit in Hoddesdon (close to where conspirators apparently once plotted to assassinate King Charles II in 1683). 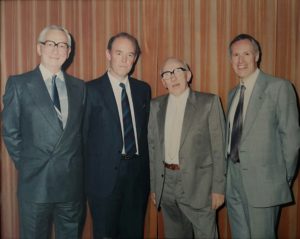 Many of their highly accurate Carbon Dioxide analysers were purchased by plant physiologists. It was therefore a logical step for them to develop (in 1971) the laboratory ADC225; the first ever specialised device for plant science research. Over the next decade, the ADC225 established an outstanding reputation for reliability and performance amongst the world’s researchers. Some liked it so much, they took it everywhere with them…

By the early 1980s, crop scientists were needing to move their research from the laboratory into the field. So, in 1983, the very first portable Leaf Chamber Analyser (LCA-1) was developed. The full production unit (LCA-2) followed in 1984.

The success of the ADC225 and LCA-2 in the 1980s led to the company winning a British government export award. By this time the company had become known to most scientists as “ADC”. In 1987, ADC joined the umbrella of the Halma group. The LCA-3 was launched in 1987 followed by the LCA-4 in 1993, each further improving the portability and performance of photosynthesis instruments. 1994 saw the introduction of our first portable leaf area meter (now the hugely successful AM350). 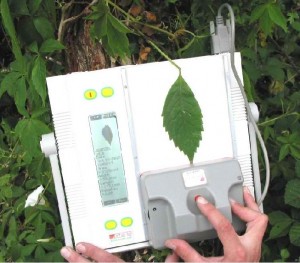 From ‘ADC’ to ADC BioScientific Ltd.
ADC Bioscientific Ltd. was established as an independent company in 1998, through a management buy-out of the ADC plant science division, headed by Sally Donaldson and Dave Mann. New developments in portable photosynthesis systems followed. The arrival of our LCi in 1999, the first analyser to incorporate a miniaturised IRGA within the handle, and LCpro in 2001, followed by LCpro+ in 2004, strengthened our reputation as leaders in portability and ease of use.

In 2006, we expanded into other parallel areas of carbon cycle research. We addressed the growing global interest in soil respiration with the development of the portable SRS series, followed by the automated ACE system in 2008. Our range of portable photosynthesis systems was further enhanced in 2011 by the LCi-SD, LCpro-SD and SRS-SD series.

ADC’s reputation for designing equipment with the user in mind is confirmed by its instruments for monitoring gases and soil respiration. With research increasingly focusing on rising levels of greenhouse gases, ADC has designed a range of gas analysers suitable for research on a multitude of life science issues. ADC also excels in its range of sophisticated instruments to assess sources of CO2. The portable Soil Respiration Systems include both intelligent systems that control environmental conditions and ultra-compact instruments weighing only 2kg. The new Automated Soil CO2 Exchange system is for long-term, unattended monitoring of soil flux.