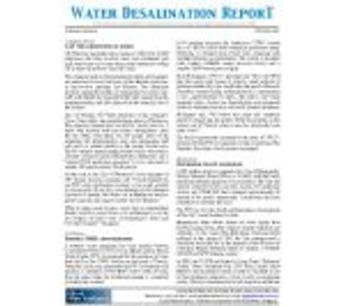 When a new project is announced, WDR gives you the contact to follow up. When a shortlist is announced, WDR tells you who’s in the picture. When a new plant is commissioned, WDR lets you know how it’s going. When your old boss gets a new job, WDR lets you know where he’s gone. If you’re in the industry, it’s the kind of information you can’t do without.

WDR’s editor is respected desal veteran Tom Pankratz, board director of the IDA and regular conference speaker. Tom’s involvement in numerous industry bodies and experience of the desal industry in the US, Middle East, Asia and Europe mean that his finger is firmly on the pulse of global desalination.

No comments were found for Water Desalination Report. Be the first to comment!