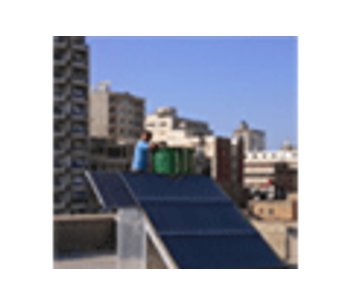 With many arid regions of Africa and Asia suffering from severe water shortages, European enterprises are stepping in to lend a helping hand, providing local communities with the tools necessary to supply themselves with drinkable water. In the past, solutions have traditionally focused on large industrial desalination plants which are capable of supplying 50 million cubic metres of fresh water every day.

This technology, however, is not suitable for the arid and semiarid regions of Africa and India, though these are the very places where it is becoming increasingly difficult to supply drinking water, particularly in rural areas. 'The regions have a very poor infrastructure,' explains Joachim Koschikowski of the Fraunhofer Institute for Solar Energy Systems ISE in Freiburg. 'Quite often there is no electricity grid, so conventional desalination plants are out of the question.' Over the years he and his team have participated in several EU-funded projects aimed at developing small, decentralised water desalination plants that produce fresh drinking water using their own independent solar power supply.

'Our plants work on the principle of membrane distillation,' says Koschikowski. The principle involved is similar to the processes involved in a Gore-Tex jacket, in which the membrane prevents rainwater from penetrating through to the skin. At the same time, water vapour formed inside the jacket by perspiration is passed through to the outside.

The researchers have so far built two different systems, both with their own energy supply. 'Our compact system for about 120 litres of fresh water per day consists of 6 square metres of thermal solar collectors, a small photovoltaic module to power a pump, and the desalination module itself,' says Koschikowski.

'When you think how much the inhabitants currently have to pay for the same amount of bottled water or soft drinks, the plant will pay off very quickly,' claims Koschikowski. The test plants in Gran Canaria and in Jordan have been operating successfully for some time. The researchers are therefore planning to market the plants through a spin-off known as 'SolarSpring' from the middle of this year.