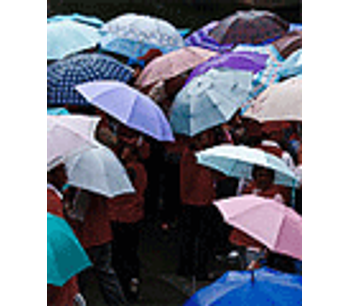 An even wetter future?

Scientists agree that climatic events such as storms and heavy rainfall could become more intense as the climate changes. New research suggests that global warming not only increases the likelihood of such events, but also leads to greater extremes in rainfall, making moves to tackle global warming and implement measures such as improved flood defences increasingly important. Global warming is now taking place, and recent flooding and heavy rainfall in parts of Europe highlight the increasing frequency of extreme weather events. Scientific understanding of how rain and other precipitation (such as snow or hail) forms is limited, as is the ability to model these processes in global and regional climate models.

Many assumptions about how extreme rainfall changes with temperature depend upon the Clausius-Clapeyron (C-C) relation. This predicts how much water vapour can be maximally contained in the air at any given temperature and pressure. The equation is used to help predict future changes in extreme precipitation, based on the following assumptions:

Scientists consider the first two assumptions valid, but the third is less certain. Researchers1 looked at rainfall records for De Bilt in the Netherlands and found that when daily mean temperatures were above 12°C, twice as much rain fell on a hourly basis as was predicted by the C-C relation; that is a 14 per cent increase per degree compared to the 7 per cent increase per degree predicted by the C-C relation. Below that temperature, the C-C relation was a reasonable predictor of how temperature would affect the intensity of rainfall in extreme events. In a regional climate simulation for large areas of Europe (Central Europe in particular), the increase in extremes of shorter (1 hour) snapshots of rainfall were also twice what they expected. This has significant implications for society given the impact of these extremes on local flooding, erosion and water damage.

In the winter when heavy rain in large scale weather systems dominates, the C-C relation is a good guide. However in the summer months when rainfall is often the result of local convection (warm air currents rising), events that exceed the C-C relation are more common.

The effects are most marked over central Europe, where the hourly intensity of extreme events could be 10-15 per cent higher for each one degree centigrade rise in temperature. Interestingly, this did not apply in France and Southern Europe, possibly because these areas are forecast to be much dryer in future as the climate changes.

The study also provides a means of checking the accuracy of our climate change predictions, and suggests that climate models greatly underestimate the effect of temperature on rainfall intensity. New types of climate change models may therefore be needed in order to represent the greater intensity of extremes in precipitation as temperatures rise.

No comments were found for An even wetter future?. Be the first to comment!