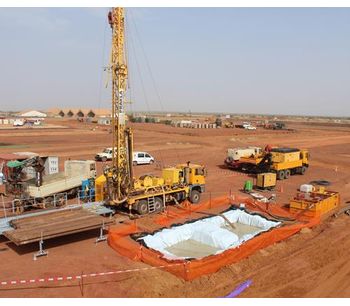 April, 26th 2018 -- Drinking water is an extremely scarce commodity in the desert city of Gao in the landlocked country of Mali in West Africa. Although the city is located on the River Niger, for ten months of the year the rainfall received is less than the evaporation rate. The German Armed Forces are currently deployed here as part of the UN’s MINUSMA mission.

In order to ensure continuous water supply at the German army's operating base and to avoid a potential load on the regional water supply network, the German Federal Ministry of Defence at the start of 2017 commissioned the securing of continuous water supply for the soldiers at Camp Castor, giving due consideration to the local population. On the basis of preliminary hydrogeological examinations, it was decided to drill additional wells at greater depths. In addition to the well drillers from the German army, Bauer Resources was commissioned to carry out the project in a collaborative approach, on the basis of its experience and capacity to realize logistically and technically complex drilling projects in West Africa.

In September 2017, a Prakla RB40 drilling rig was used by BAUER Senegal SARL to drill three functioning wells with a depth of 300 meters. The complete flushing and construction material was supplied by GWE. A total of 22 employees are involved in the project, which is expected to be completed by the end of April 2018.