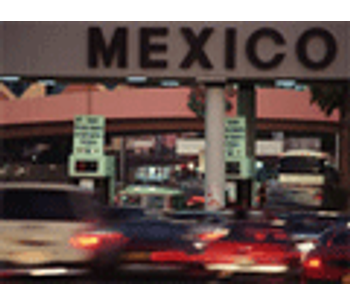 Bordering on disaster - US and Mexico fight to green their borders

According to the US Environmental Protection Agency (EPA), the 14 metropolitan areas along the US-Mexico border suffer from 'abysmal air and water quality' as well as a host of other unacceptable environmental hazards. Last week, governors from Mexican and American states along the border were hosted by California Governor Arnold Schwarzenegger to discuss these and other environmental issues of mutual concern.

The 10 Border States - Arizona, Baja California, California, Chihuahua, Coahuila, Nuevo Leon, New Mexico, Sonora, Tamaulipas, and Texas, constitute an economy that ranks third in the world for size. But rapid growth of business, accelerated in part by the North American Free Trade Agreement (NAFTA), and ongoing deficiencies in the enforcement of environmental regulations have resulted in near disastrous ecological conditions.

This has led to major health problems for residents of border cities in the region due to air pollution, inadequate water and sewage treatment, improper management of pesticides, and careless disposal of hazardous and solid wastes. High risk residents of rural communities suffer more, as they lack inadequate water supply and medical treatment facilities. The elderly and children are especially at risk.

The United States and Mexico have been working collaboratively for years to deal with these problems and some progress has been made. But much more is required. The two nations have launched the Border 2012 Initiative to improve the environmental health of the region’s 12 million people.

At last week’s meeting, representatives of the 10 states on the Mexico-United States border signed a Letter of Understanding on 'tire pile prevention measures' to eliminate the public health risks such as encephalitis, West Nile virus, dengue fever and malaria associated with stagnant water that accumulates in abandoned ties.

So far, over So far 4 million scrap tires have been removed from the U.S.- Mexico border, lowering considerably the risk of fires that can burn for weeks releasing thick black smoke and liquid wastes that contaminate ground and surface water.

Business is good, but deadly

Under NAFTA, trade between the US and Mexico has been increasing substantially.  Industries (maquiladoras) along the Mexican side of the border are an important source of employment but are also a source of negative environmental impacts. Air and water quality are topics of particular concern. Although gains have been made, air quality is still a major problem.

Surface and groundwater resources in this primarily arid region are threatened by contamination, including agricultural runoff, industrial discharge, and untreated sewage.

Inadequate water supply and inefficient use of water could limit future regional development as increasing demand for water from both sides of the border, has led to the rapid depletion of underground aquifers.

The pressures associated with industrial and population growth, the increase in the number of old vehicles, differences in governance and regulatory frameworks, and topographic and meteorological conditions present a 'challenging context' in which to address air quality management, notes the EPA.

These same factors also present many business opportunities for bi-national cooperation. The North American Development Bank (NADB) specializes in providing loans to finance projects to improve air and water quality on both sides of the border.

NADB and its sister institution, the Border Environment Cooperation Commission (BECC), were created under the auspices of NAFTA specifically to address environmental issues in the U.S.-Mexico border region. For years the Bank laboured in obscurity, largely ignored by the governments that spawned it, and unable to lend enough to help low-income communities along the border to deal effectively with their environmental problems. But an amended Charter for the Bank came into force in 2004 which greatly expanded the scope of its activities and its lending portfolio.

Progress is being made ...
In an area where surveillance and monitoring is usually focused on human trafficking, efforts are now underway to improve bi-national capabilities to monitor the relationship between human health and environmental exposures.  This will greatly enhance bi-national capabilities to respond to incidents and to protect the environment and public from exposure to harmful contaminants and possible serious environmental or health impacts.

Previous impediments to progress, including the lack of an overall strategy, lack of access to funds by poor communities, and cultural differences, are being dealt with. But as Governor Swarzenegger noted in his address to his colleagues last week '... our work is complicated, it’s never-ending and it requires constant coordination and collaboration.'

He’s right. And the health and well-being of the millions who live on the border, as well as the millions yet to arrive continues to hang in the balance.

No comments were found for Bordering on disaster - US and Mexico fight to green their borders. Be the first to comment!