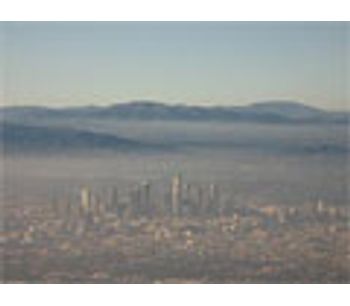 Pittsburgh moved to the top of the list of cities most polluted by short-term levels of particle pollution, which the Lung Association describes as 'a deadly cocktail of ash, soot, diesel exhaust, chemicals, metals and aerosols that can spike dangerously for hours to weeks on end.'

The body's natural defenses, coughing and sneezing, fail to keep these microscopic particles from burrowing deep within the lungs, triggering serious problems such as breathing, asthma and heart attacks, strokes, lung cancer and early death.

Pittsburgh ranks second on the list of cities with the most year-round particle pollution while Los Angeles again tops this list.

As a national trend, the American Lung Association, ALA, report shows that declines in ozone and particle pollution have stalled. Air pollution levels fell in the early years of this century, but have leveled off in the last three years, particularly when controlled for weather.

'The air quality in several cities has improved, but in others, declines in pollution have stalled. The trends tell us loud and clear that we need to do more to protect Americans from breathing air that's simply hazardous to their health,' said Bernadette Toomey, president and chief executive of the American Lung Association.

'We applaud the aggressive efforts of Los Angeles to control particle pollution,' she said. 'It's proof that making a commitment to clean up pays off.'

Los Angeles, despite being ranked highest on two of the three most-polluted lists, saw continued improvements in air quality, dropping its year-round particle pollution levels by nearly one-third during the last decade.

L.A. also saw solid improvement in levels of ozone or smog, a gas formed most often when sunlight reacts with vapors emitted when motor vehicles, factories, power plants and other sources burn fuel.

ALA Chief Medical Officer Dr. Norman Edelman told journalists on a conference call Tuesday that exposure to ozone increases the risk of lung cancer and other illnesses, particularly if they already have respiratory problems such as asthma.

'A short burst of pollution sends people to the emergency room,' Dr. Edelman said. 'They may get worse, they may die.'

A National Research Council report released on Earth Day documented that even brief exposures to ozone can cause premature death.

Yet nearly one-third of the U.S. population lives in areas with unhealthful levels of ozone, the Lung Association says.

Closer to the top of the list of most ozone-polluted cities this year are San Diego, Atlanta, Charlotte and the Baltimore-Washington, DC metropolitan area.

Birmingham, Alabama, joined the ozone pollution list for the first time, ranking at number 22, while also ranking as the number four most polluted city for year-round particle pollution.

The five worst cities on the ozone pollution list saw modest improvements. Fresno, California, for instance, experienced a decline in the number of high ozone days since its peak in 2001-2003.

Saying it was pressed for time to write the State of the Air report, the American Lung Association said it used the U.S. Environmental Protection Agency's 1997 standard for ozone levels rather than the new tighter standard announced on March 12.

'If we were to measure the number of unhealthy days against the new ozone standard, it would show that ozone pollution is worse than the report indicates,' said Toomey.

'Even with these stricter ozone standards, Americans are being denied the health protection they deserve under the Clean Air Act,' she said.

The Lung Association is lobbying for stricter standards that coal-fired power plants would have to meet for emissions of nitrogen oxides, mercury and fine particles.

New this year, the State of the Air report provides online charts showing the trends in ozone and year-round particle pollution in each of the 25 most polluted cities.

No comments were found for Breathing in Los Angeles and Pittsburgh can be hazardous for your health. Be the first to comment!