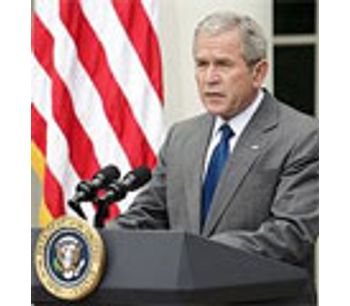 President George W. Bush has removed the executive ban on offshore exploration on the Outer Continental Shelf, the OCS, that has stood since his father was in the Oval Office. Speaking in the White House Rose Garden, the president blamed the Democratically-controlled Congress for rising gasoline prices that averaged more than US$4.07 a gallon at the 4th of July holiday weekend. That is 13 cents more than last month and US$1.09 higher than a year ago, according to the American Automobile Association. 'For years, my administration has been calling on Congress to expand domestic oil production,' said President Bush. 'Unfortunately, Democrats on Capitol Hill have rejected virtually every proposal - and now Americans are paying at the pump. When members of Congress were home over the Fourth of July recess, they heard a clear message from their constituents: We need to take action now to expand domestic oil production.'

House Speaker Nancy Pelosi, a California Democrat, today responded by blaming the president for pursuing the agenda of the major oil companies.

'Once again, the oilman in the White House is echoing the demands of Big Oil,' said Pelosi.

'The Bush plan is a hoax. It will neither reduce gas prices nor increase energy independence,' said Pelosi, who says the oil companies already have oil leases on nearly 68 million acres of public lands and coastal areas that they are not exploring.

'It's time to tell the oil industry, 'You already have millions of acres to drill. Use it or lose it,' she said.

'If the President wants to bring down prices in the next two weeks, not the next two decades,' Pelosi said, 'he should free our oil by releasing a small portion of the more than 700 million barrels of oil we have put in the Strategic Petroleum Reserve.'

Pelosi and members of her leadership team are working on legislation that maximizes production of areas that are already open to drilling.

One measure under discussion would expedite completion of new oil and natural gas pipelines in Alaska. Another would direct the Bureau of Land Management to hold annual instead of biannual lease sales for the National Petroleum Reserve. Other provisions would prevent Alaskan oil from being sold outside the United States, and further restrict speculation in oil markets. The bill is expected to come before the House this week.

The OCS contains an estimated 86 billion barrels of oil and more than 420 trillion cubic feet of natural gas.

Senator John McCain of Arizona, the presumptive Republican presidential nominee, today repeated his support for allowing more drilling, but he emphasized that the states should decide whether or not to open coastal areas to oil and gas exploration.

The National Association of Manufacturers, NAM, today praised President Bush for lifting the executive ban on offshore drilling on the Outer Continental Shelf.

“We are encouraged by the actions of the president and urge Congress to show equal resolve by moving forward in a quick, positive, and bi-partisan manner to lift its ban on offshore exploration,” said Jay Timmons, NAM executive vice president.

“This country is facing an energy crisis,” Timmons said. “It is imperative that every opportunity to reduce the cost of energy be taken.'

“Providing access to these domestic energy resources will send a signal to the rest of the world that the U.S. is serious about easing the burden faced by American consumers and manufacturers,” Timmons said.

President Bush called on Congress to pass legislation repealing the congressional ban, and facilitating 'responsible offshore exploration' that allows states 'to have a say in what happens off their shores, provides a way for the federal government and states to share new leasing revenues, and ensure the environment is protected.'

Bush also called for Congress 'to tap into the extraordinary potential of oil shale, which could provide Americans with domestic oil supplies that are equal to more than a century's worth of current oil imports.'

But the shale proposal is not likely to generate much support across the country. Late last month, the U.S. Conference of Mayors meeting in Miami adopted a resolution aimed at avoiding the use of high carbon fuels such as tar sands, liquid coal, and oil shale. Production of useable oil and gas from these sources requires large amounts of water and energy and emits large amounts of greenhouse gases.

Bush also called on Congress to permit exploration in currently restricted areas of northern Alaska, 'which could produce roughly the equivalent of two decades of imported oil from Saudi Arabia.'

And the president repeated his demand for Congress to expand and enhance U.S. refining capacity, 'so that America will no longer have to import millions of barrels of fully-refined gasoline from abroad.'

While some governors, such as Florida Governor Charlie Crist favor offshore drilling, many governors are opposed.

Republican Governor Arnold Schwarzenegger of California said last month at the climate change conference in Florida, 'Politicians have been throwing around all kinds of ideas in response to the skyrocketing energy prices, from the rethinking of nuclear power to pushing biofuels and more renewables and ending the ban on offshore drilling. But anyone who tells you this would bring down gas prices any time soon is blowing smoke.'

No comments were found for Bush removes executive ban on offshore oil drilling. Be the first to comment!