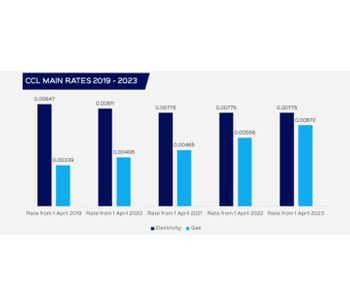 CHP is solution to huge increases in Climate Change Levy

The decision was announced in the March 2020 budget. It will affect all businesses and public bodies in scope of CCL, except those with Climate Change Agreements or using low carbon technologies such as 'good quality' Combined Heat and Power (CHP).

The Climate Change Levy  is a UK-wide environmental tax on electricity, gas, LPG and solid fuels supplied to businesses and public sector consumers, with the aim of improving energy efficiency.

'Most businesses will see their energy bills rise due to these hikes in CCL on natural gas, which is a fixed, non-negotiable cost for the majority of organisations. However, organisations using high efficiency CHPwill benefit from financial relief,'said Hugh Richmond.

'Those using natural gas CHP on-site and qualifying as 'good quality' under the Combined Heat and Power Quality Assurance(CHPQA) standard will be exempt from CCL payments on gas used for power generation. They will also avoid CCL on self-generated electricity used on-site, thus achieving double savings. This makes the economic case for CHP even more attractive, as illustrated by the rapid return on investment – often within three years.'

CCL makes up approximately 5% of total charges on a typical business energy bill and is one of the largest environmental taxes.

Gas producers currently pay lower CCL charges than electricity producers, even though there has been much greater success in reducing power emissions, compared to the more difficult task of decarbonising gas. The government is levelling up the disparity. As such, CCL rates on electricity will decrease by 4.4% both this year and next year – to stabilise at a levy rate of £0.00775 per kWh through to 2023.

On-site CHP/cogeneration is a highly efficient process involving the simultaneous production of electricity and useful heat. It is almost twice as efficient as using individual boilers and conventional power generation, where the waste heat is normally wasted to the atmosphere and transmission losses occur in transporting power to the end-user.

CHP can help organisations reduce their energy costs and ensure the security of their supply. It also provides a cost-effective way to make carbon savings.

If a project meets the CHPQA assessment criteria for efficiency and environmental performance, it is certified as ‘Good Quality CHP’. It is then eligible for partial CCL exemption, as well as other financial incentives. These include preferential business rates and taxation benefits under the Annual Investment Allowance.

CCL must be paid by most organisations, except light energy users and charities. Certain heavy energy users can also qualify for exemption by negotiating a Climate Change Agreement, but most other organisations are liable for this significant levy. Using efficient on-site CHP provides a proven route to reducing the financial sting of this environmental tax on both gas and electricity costs.

Edina is a market-leader in the supply, installation and maintenance of Combined Heat and Power (CHP) units and the exclusive distributor of high-efficiency MWM gas engines in the UK and Ireland.