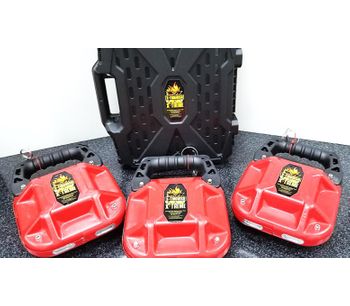 Combat Fire as a Weapon with the Most Powerful Handheld Fire Suppression Tool available today!

Vernon Hills, IL, USA -- In, Fire As A Weapon In Terrorist Attacks, author Joseph W. Pfeifer states that “the use of fire for criminal, gang, and terrorist activities, as well as targeting first responders, is not new.”

We no longer operate in a world where fires are the fire department's problem and violent actors are the police department's problem. Instead, the nature of today's threats – and particularly the terrorist threat – dictates that public safety professionals must cooperate, train and work together to ensure public safety. Police and fire professionals must leverage their unique strengths and capabilities to work in a coordinated fashion to maximize their effectiveness. To do this, it's helpful to understand the kinds of operations that would require a joint police-fire response. Here are the ABCs of fire as a weapon. Each of the categories has its own special threats, considerations and requirements for law enforcement and fire personnel.

In an ambush, fire is used as a weapon to attack unwitting victims, or as bait to lure responders into an area where they will be attacked with other weapons.

In barricade scenarios, fire is used by an attacker who is holding hostages or who is launching an attack from within, such as a sniper firing from within a burning structure.

-fire is used by attackers to destroy property, harm innocents, attack public safety officials and mask criminal activity. Fire , in this scenario,incites frenzy, so it must be extinguished quickly before it encourages further violence and unrest.

-fire is used as part of a symphonic attack, where multiple locations are hit simultaneously, or in close succession, to overwhelm the ability of defenders to respond rapidly and efficiently.

Having a hand-tool in the field that can literally be deployed on scene by any personnel present to stop the propogation of fire utilized as a weapon is a game changer. As fast as the attackers can start a fire the unit can be deployed to alleviate the fire and its intended damage. This tool is the X-Tinguish®  X-Treme, 'WHEN SECONDS COUNT, “PULL THE PIN AND THROW IT IN”

Weighing slightly less than 14lbs.,The X-Tinguish®  X-Treme is a tool for every toolbox. The unit has the capability of fully suppressing a fire (Class A,B,C or K) in a space up to 5,300Cu.Ft. while also removing up to 1000°F in temperature in 60 seconds or less while also remaining out of harms way. In a crucially dangerous and controntational atmosphere, the use of the X-Treme could make all the difference in the world!

For more information go to https://www.flameguardusa.com/FST or call 855-377-2100 or email sales@flameguardusa.com  We are open 0900am to 0500pm Mon-Fri. Closed weekends and Major US Holidays. Stay safe!!

No comments were found for Combat Fire as a Weapon with the Most Powerful Handheld Fire Suppression Tool available today!. Be the first to comment!