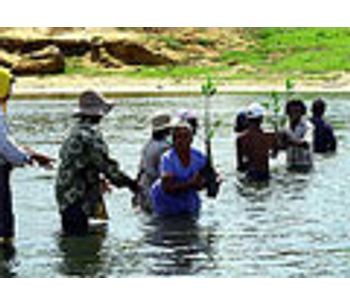 Tropical cyclone Nargis made landfall in the Asian nation of Myanmar on May 2, 2008, causing the worst natural disaster in the country's recorded history – with a death toll that may have exceeded 138,000. In the July 2009 issue of the journal Nature Geoscience, researchers report on a field survey done three months after the disaster to document the extent of the flooding and resulting damage.

The information – which may be the first reliable measurements of cyclone damage in the area – could lead to development of computer models for predicting how future storms may impact the geologically complex Ayeyarwady River delta. Those models could be the basis for planning, construction and education that would dramatically reduce future loss of life.

Among the findings of the study: the cyclone created a storm surge as much as five meters high – topped by two-meter storm waves – that together inundated areas as much as 50 kilometers inland. Fatality rates reached 80 percent in the hardest-hit villages, and an estimated 2.5 million people in the area lived in flood-prone homes less than 10 feet above sea level.

'The recorded high water marks serve as benchmarking for numerical models for the complex hydraulic response of the giant Ayeyarwady delta,' noted Hermann M. Fritz, an associate professor in the School of Civil and Environmental Engineering at the Georgia Institute of Technology. 'Ongoing numerical simulations will allow us to determine flood zones and vulnerabilities for future cyclone scenarios. Based on those, evacuation scenarios and evaluation plans will be derived in collaboration with international partners and the Myanmar government.'

Already, a local non-governmental organization in the nation has developed a cyclone education program to raise awareness among residents, said Fritz, who was the only international scientist leading a team that surveyed 150 kilometers of the country's coastline during a two-week period August 9-23, 2008.

'The aim of our project was to document the extent of the flooding and associated damage in the delta,' Fritz explained. 'Field surveys in the immediate aftermath of major disasters focus on perishable data, which would otherwise be lost forever – such as infrastructure damage prior to repair and reconstruction.'

In the flood zone, for instance, the researchers searched for evidence of water marks on buildings, scars on trees and rafted debris as indicators of the maximum water height.

No comments were found for Flooding and damage from 2008 Myanmar cyclone assessed. Be the first to comment!